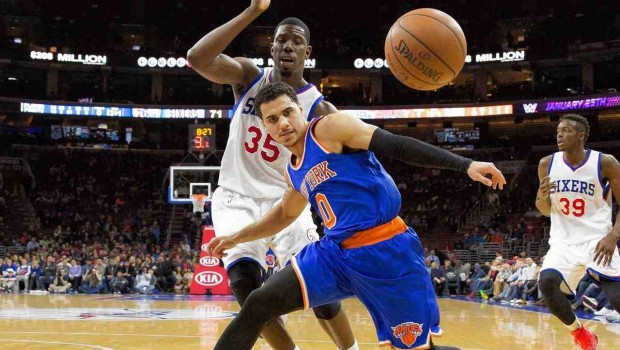 THE AWFUL SIXERS FEEL RIGHT AT HOME IN THE DREADFUL ATLANTIC

Your faves are terrible, it is true, but the rest of their division is making them feel right at home.

The Atlantic Division is by far the worst division in the league, and there is no sign anytime soon that it will improve.

The 2014-15 edition of the Atlantic is the worst division since the NBA split into two conferences back in 1970-71.

The floor had previously been set by the Central Division in 1971-72, but entering Sunday, the Atlantic had a non-divisional winning percentage of just .320, which would be a new low, according to Stats LLC.

Entering Sunday, the Atlantic’s -5.36 point per game differential is significantly worse than the previous low, set by the Central in 1970-71 when the Baltimore Bullets took the division with a 42-40 record.

January has been particularly bad for the Atlantic. All five teams have a losing record for the month, and entering Sunday, they had a combined non-divisional record of 12-37 (.245). The Midwest Division in December 1975 (11-40, .216) and the Atlantic in April of 1991 (8-27, .229) had lower winning percentages in non-divisional games, but no division has ever been outscored like this.

Through its first 49 games of January, the Atlantic was torched by an average of 10.18 points in non-divisional games. In terms of total point differential, the Nets (-108), Knicks (-113), and the 76ers (-168) have been the NBA’s three worst teams this month.And things could have been worse for the Atlantic. The Knicks (8-37) recently had a three-game winning streak, which ended on Saturday when they scored just 71 points in a loss to Charlotte.

The Nets (18-26) have done their part, too, losing to the Los Angeles Clippers and Utah Jazz on Thursday and Saturday, respectively, by an unimaginable total of 74 points.

Most of the Nets’ problems have been on the perimeter, where they have made a league-worst 26.3% of their three-point attempts in January.

Things only got worse on Thursday night, when marksmen Mirza Teletovic (62 made three-pointers this year) ended up in the hospital with blood clots in his lungs and was subsequently declared out for the remainder of the season.

Things could improve when point guard Deron Williams (38.9% accuracy from three-point range on the season) returns from his rib injury. But he has only recently resumed on-court activities and remains out indefinitely.

Further exacerbating the Nets’ situation is the health of Joe Johnson, the team’s leading scorer, who told reporters on Saturday that he has been playing with tendinitis in both his right knee and left ankle.

The Knicks, Celtics and 76ers, meanwhile, have been killed on the boards this month, retrieving just 48%, 47.4% and 46.8% of potential boards, respectively, since the New Year began.

Such ineptitude might have gone unnoticed in another division, but the Celtics, 76ers and Knicks franchises have won a combined 22 NBA titles, and the Nets have a pair of ABA crowns to boot.

Of course, the division has produced only one title since 1986, and both the Celtics and 76ers were rebuilding before this season even began.

The same cannot be said for the Nets ($90 million) and the Knicks ($81 million), who rank first and seventh payroll, respectively. The former still has a chance at taking the eighth seed in the playoffs, but Knicks president Phil Jackson waived the white flag when he dealt J.R. Smith and Iman Shumpert to Cleveland in what amounted to a salary dump.

For Knicks fans, the only significant basketball to be played at Madison Square Garden in January took place on Sunday, when potential top pick Jahlil Okafor had 17 points and 10 rebounds to help Duke beat St. John’s, 77-68.

The 76ers and Celtics also have lofty hopes for the draft lottery, but the Nets aren’t as fortunate. When general manager Billy King acquired Johnson from Atlanta back in 2012, he gave the Hawks the right to swap first-round picks in the 2015 draft. The Hawks currently have the best record in the Eastern Conference, so the Nets should temper expectations.