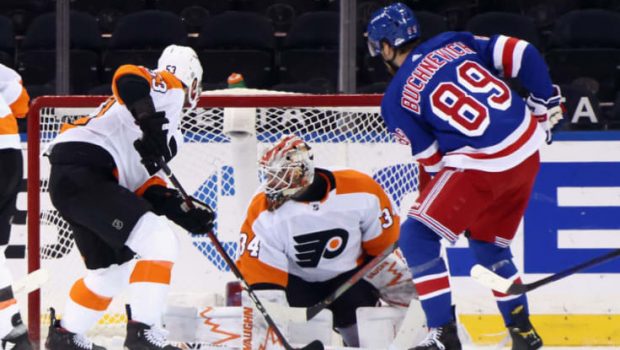 The Flyers continued to go through the motions last night in Madison Square Garden.

They were 11-4-3 after beating Buffalo on Feb. 28 but have gone 10-15-4 since to fall nearly out of the playoff race under former Rangers coach Alain Vigneault.

Alexandar Georgiev stopped 26 shots, Pavel Buchnevich and rookie Alexis Lafreniere each had a goal and an assist, and the Rangers won 4-1 Friday night for their fifth win in seven games.

The Flyers are now stuck at 49 points, 11 behind the Bruins for the last East division playoff spot with nine games left.

Chris Kreider and Filip Chytil also scored and Artemi Panarin had two assists to help the Rangers bounce back one night after a 3-2 loss to the Flyers. New York pulled back six points behind Boston for the fourth and final playoff spot in the East Division. The Rangers have eight games remaining while the Bruins have 10.

Panarin and Adam Fox registered assists on Kreider’s goal. It was the 100th assist as a Ranger for Panarin, who signed a free agent in July 2019. Panarin has points in eight of his last nine games against Philadelphia.

Lindblom tied it at 6:47 with his seventh goal, guiding the puck past Georgiev. Lindblom had just one point in his previous 14 games.

Buchnevich put the Rangers ahead 2-1 at 7:56 with his 20th, assisted by Mika Zibanejad and Lafreniere.

The teams played a scoreless second during which the Flyers had a golden opportunity to tie the contest when they had a two-man advantage for 82 seconds late in the period. But the best save of the sequence belonged to Lyon, who denied Chytil on a breakaway just after the forward left the penalty box.

Lafreniere made it 3-1 at 9:24 of the third for his ninth of the season. Buchnevich and Zibanejad assisted. Zibanejad has seven goals and 10 assists this season against the Flyers, including two six-point games.

Chytil completed the scoring with his eighth at 13:40, with assists to Kaapo Kakko and Panarin, who leads the Rangers with 55 points in 37 games.

The Rangers are 19-4-4 this season which Panarin has a point. The 29-year-old Russian forward has 98 points (35 goals, 63 assists) in 59 career games at Madison Square Garden, including 12 goals and 24 assists in 18 home games this season.

After beating the New Jersey Devils four straight times, the Rangers were coming off a 6-1 road loss to the Islanders on Tuesday and Thursday’s dispiriting 3-2 loss to the Flyers. The Flyers had won last two meetings between the teams, including a 2-1 decision on March 27 at Philadelphia.