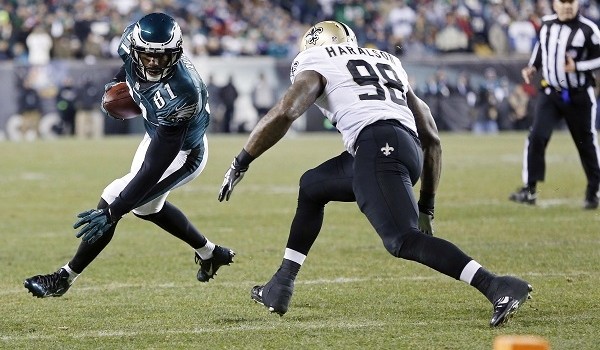 AVANT WILL REMIND EAGLES’ FANS OF HIS BLUE-COLLAR STYLE

Even though he now calls Carolina home instead of Philly, wide receiver Jason Avant hasn’t changed.

One of the first things Avant did after joining the Carolina Panthers was accuse reporters of taking his quotes out of context. He felt the need to call Chip Kelly, who let him go, and explain he didn’t mean to say he butted heads with the Eagles’ head coach about running pass routes.

“That was my first taste of Charlotte,” Avant said the other day as the Panthers prepared to play the Eagles tonight at the Linc

“They told me that they weren’t like Philadelphia media and they wouldn’t turn your words a little bit. But I found out the media is the media everywhere.”

From the first snap tonight, the Birds know that Avant enjoys doing the dirty work he did for them until they let him go to save money and turn the page on the old culture.

Avant is a master at cozying up to opponents, media or otherwise. He congratulated Jeremy Maclin, the most recent NFC offensive player of the week, on a spectacular comeback from knee reconstruction. Maclin has eight touchdown receptions. Avant, 31, had a dozen TDs in his career with the Eagles. He has one with the Panthers (3-5-1).

“In the type of offense coach Kelly has there’s going to be opportunities,” said Avant, who has 20 catches for 193 yards with the Panthers. “There’s going to be a lot of easy catches. And when you have a lot of easy catches, whether they be bubble screens or five-yard catches, when you have a guy as dynamic as Mac those turn into 10, 15-yard gains and then you have his deep threat ability. I knew if he was healthy he’d be fine.

“That’s my boy. We are similar in a lot of ways. And he works really, really hard. I told him I’m so proud of what he’s doing.”

Avant still owns a house in South Jersey. He says he likes the private school system there. And he hasn’t ruled out returning to the area.

If Avant’s future remains somewhere else, he wants to be remembered as “Just a hard working guy, just like the people in Philadelphia.”

“Not the most talented guy, not the biggest or the strongest or the fastest,” Avant said. “Just a guy that played with a lot of intensity, played as hard as I could and I worked at it every day. That’s what I want.”