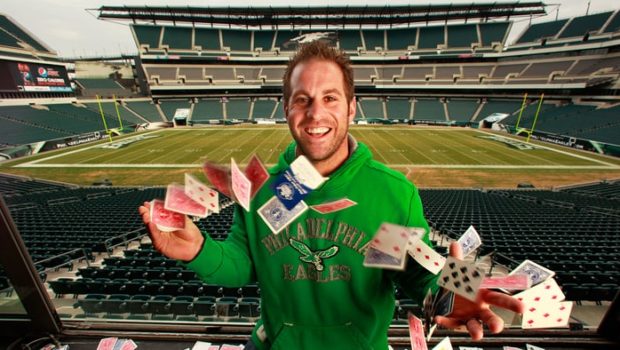 Ex-Eagles long snapper Jon Dorenbos, traded to the Saints on Monday, overcame an unspeakable tragedy when he was young, and has magically adopted a positive attitude that has attracted a host of new fans and, most importantly, his new wife Julie

The magic man is in his element. He’s working a crowd in the back room of a Philly sports bar, his baseball cap turned backward and the sleeves of his sweat shirt pushed up over his thick forearms.

A dozen men are huddled around him, transfixed. That’s not because he’s Jon Dorenbos, long snapper for the Eagles, traded two days ago to the Saints.

It’s that he’s holding a deck of playing cards, effortlessly riffling them with one hand, sometimes shooting them to the other in a graceful arch.

Fanning the cards, Dorenbos has one of the men select one, sign it with a felt-tip marker, then put it back in the deck. More shuffles, a few flourishes, and the card disappears — only to wind up tucked in the watchband of a perplexed spectator.

The men erupt in laughter. In his day job, Dorenbos, who turned 37 in July, earns $1 million a year hiking a football between his legs on punts and kicks. In his off hours, he performs seamless illusions that earn him thousands of dollars an hour — tricks such as swallowing needles, then extracting them perfectly threaded; turning a floating paper rose into a real one; removing people’s neckties without them noticing.

Magic is much more than a hobby to Dorenbos. It first offered him a refuge from a sorrowful childhood. Now it’s his calling card, allowing him not only to entertain but to help others.

“I’ll never forget what magic did for me,” said Dorenbos. “I know the power that it has.”

On Aug. 2, 1992, Alan Dorenbos, a computer consultant at Microsoft and onetime president of the local Little League, bludgeoned his wife to death with a bench grinder during an argument in their Seattle-area home.

He hid Kathy’s body in a sleeping bag in the trunk of his car, gave excuses to their sixth-grade son, Jon, about her whereabouts and repainted the garage in hopes of covering up the crime.

Jon, the youngest of three children, was at a baseball day camp when his father inexplicably drove her body to the police and turned himself in.

The trial attracted intense media coverage. Jon, who testified against his father, remembers having to hide inside car trunks to avoid reporters.

The state of Washington appointed family therapist John Walter to work with Jon and his sister Kristina. Rather than shelter the children, Walter sought to expose them to the unvarnished horror of the slaying in hopes of exorcising it. He wanted them never to wonder what their father had done, Jon said. Walter encouraged them to attend the trial — Jon and Kristina were there every day with their older brother Randy, frequently holding hands — and to view the autopsy photos of their mother.

“He was the kindest, most loving and compassionate person that you could possibly ask for, but he did everything uncomfortable to make us grow,” Jon said. “He gave us the tools to heal our souls and make us productive people.”

After Jon and Kristina viewed the autopsy photos, the therapist took them to a cliff overlooking Puget Sound and encouraged them to scream.

“We probably sat there for 45 minutes and cried and screamed,” Jon recalled. “… it was one of the greatest things I ever did in my life.”

Alan Dorenbos claimed he acted in self-defense. The jury thought otherwise. He was convicted of second-degree murder and sentenced to 13 years, eight months. He was released from prison six years ago and Jon has had no contact with him. The way he sees it, the crime cost him both his parents.

Jon and his sister left Washington to live with their mother’s sister in Garden Grove, Calif. Shortly after moving to Orange County, Jon returned to Woodinville, Wash., to participate in an all-star baseball tournament. He stayed with a teammate’s family.

There he became thrilled with magic when a 16-year-old neighbor showed him a simple trick: making a small sponge ball disappear and then multiply. The boy wound up taking Jon to a magic shop and buying him a book of tricks.

Back in Garden Grove, Dorenbos immersed himself in the world of illusions. He learned that book by heart, and he would come home from school every day to practice in his room with a deck of cards. Sometimes he would do the same tricks over and over through the night.

“It was therapeutic for me,” he said. “It was something I could control. I got obsessed with the sleights, and I knew that I wanted to play pro ball and be a magician. That’s it.”

His family embraced his passion. His grandfather helped him build a “sub-trunk” that allowed Dorenbos to trade places with an assistant ostensibly locked in the box.

His aunt introduced him to a friend, Ken Sands, a longtime professional magician who owns a magic store in Westminster. Sands marveled at Dorenbos’ self-taught skills, and the acts the boy would mimic by studying videos of famous magicians.

“As a close-up magician, he’s as good as any professional I’ve ever seen,” Sands said.

For his graduation, Dorenbos built a contraption that allowed him to create the illusion of levitating a girl in the back of a moving truck while it was being driven by Sands. His classmates went crazy.

“Every time the truck hit a bump, the girl would bounce,” Sands recalled with a laugh. “We were laughing our butts off, and Jon didn’t care one bit. He was just doing his cool magic thing. He was getting to create magic and float this girl. The crowd loved it. They were screaming.”

They cheered for Dorenbos on the sports fields too. He played football, baseball and basketball at Pacifica High in Garden Grove. He didn’t stand out enough to earn a college scholarship, however, so he went to play football at a two-year school, Golden West College in Huntington Beach. He played linebacker on a team that lost all 10 of its games. He left an impression with his dedication to improve.

“When you’re 0-7, 0-8, it’s hard to get guys to even practice,” said Joe Hay, his position coach at Golden West. “Jon would be out there every morning at 7 a.m., an hour before practice, working on the details. You just don’t see that.”

Dorenbos had a good friend, Paul Tessier, who was playing football at the University of Texas, El Paso. The Miners needed a long snapper, and Dorenbos had been one in high school. Tessier told them about Dorenbos.

Dorenbos spliced together a Golden West tape of “his” greatest plays, grainy footage that was not only of him but also of two teammates: another linebacker and the long snapper. He makes no apologies for the deception; he said he did what he needed to do to pursue his dream of playing football at a Division I school.

At UTEP, where his picture is displayed prominently in the athletic department, he has long since been forgiven for the ploy. Besides, his coaches said, he certainly proved his ability to play.

“His tape was magic, yes, but I was sold on him when I met him,” said Nate Poss, who worked with special-teams players at the time and is now the school’s director of football operations.

Dorenbos became a very reliable long snapper who delivered the ball into the hands of the punter or holder faster than anyone. His 15-yard snaps to the punter have been clocked at 0.58 of a second. Anything less than 0.69 of a second is considered excellent. His eight-yard snaps for placekicks are so precise that the ball spins exactly 21/2 times so the laces face toward the goalpost, eliminating the need for the holder to rotate the ball before placing it on the ground.

Poss remembers how Dorenbos would sit at the dinner table and entertain his teammates by seeming to bend — and then repair — silverware when he lightly passed his fingers over it.

“It turned into an epidemic at our training table,” Poss said. “Everybody else would try it, and we were running out of forks there for a while.”

Passed over in the 2003 NFL draft, Dorenbos signed as a free agent with the Buffalo Bills and played for them until a knee injury cut short his second season in 2004.

He resurfaced the next year with the Tennessee Titans. He signed with the Eagles in 2006 and had been with them since, making the Pro Bowl after the 2009 season.

Dorenbos, 6 feet and 250 pounds, has Popeye forearms and calves as thick as coffee cans. He has become a cult hero among many Eagles fans who wear No. 46 jerseys with “MAGIC MAN” stitched across the shoulders. He even has a weekly TV show in Philly that gives viewers a behind-the-scenes look at what it’s like to be an NFL player.

“It’s not only what he does on the field, but in the locker room he brings guys together,” Eagles tight end Brent Celek said. “Guys just want to be around him. His magic brings you over, but it’s his personality that keeps you there.”

Dorenbos is unflappable under intense pressure on the field, but he sometimes struggles to maintain his composure when talking about the solace he found in magic.

“I’ll never forget where I was when I saw my first trick, and how at a time in my life…” he said, clearing his throat, wiping his eyes and apologizing, “… when my life was so upside-down that I didn’t feel like I could control anything … that this kid who showed me a trick and gave me a book, throughout this journey of moving to a new city and living with my aunt and losing both my parents…”

When Dorenbos began his NFL career with Buffalo, and word of his life story spread, he was approached by motivational speaker Kevin Elko, who offered him $500 to talk for 15 minutes at a corporate event. Dorenbos told the group about his parents, his magic and his career, doing card tricks as he spoke. Elko was so impressed, he included Dorenbos at every opportunity.

“I still cry like a baby when I hear him tell his story,” Elko said. “The way he grabs you. His message is real easy: You can sit and feel sorry for yourself, or you can have a vision.”

While speaking at a corporate event four years ago in Philly, Dorenbos met Julie Lesicki, who had a job selling annuities. She was so moved by his talk, she e-mailed him. He responded by asking her to dinner. They were married in April 2010.

Their reception featured an ice sculpture in the shape of playing cards, tables named for cards and card decks as mementos reading “Julie and Jon, Two of a Kind.”

Dorenbos serenaded his bride with a song he wrote for her, then spoke to the guests about the relationship he has with her, and about his memories of his mother.

“By no means am I ashamed of where I came from,” he said later. “And the therapy that I went through, talking like this and getting teary-eyed, just makes me remember the good times I had with my family and the journey I’ve had.”

Fearless transparency. That, friends say, is the magic man’s greatest trick of all.