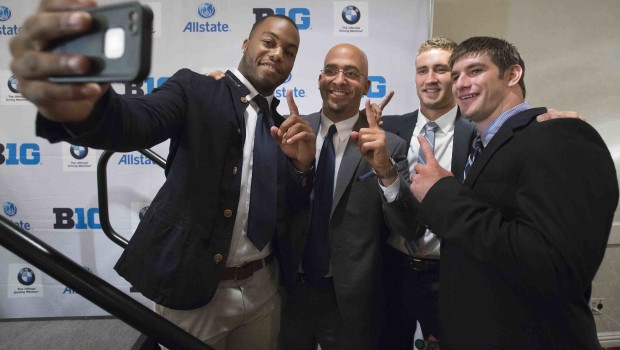 AT PENN STATE, HAPPY IS THE FACE OF A PROGRAM IN FLUX

Penn State has 121 players on its roster, and a breakdown of those numbers reveals just what dire straits the Nittany Lions could be facing this season as training camp opened Monday in State College:

A whopping 88 underclassmen, barely 75 scholarship players, a fourth head coach in as many years (including Tom Bradley, the interim coach in 2011) and zero chance at a bowl game this season.

And yet somehow none of that seems to have any impact on the enthusiasm surrounding the start of the James Franklin era in Happy Valley.

Franklin takes over a different program than the one Bill O’Brien inherited in 2012. On the heels of the sex abuse scandal that rocked the university and brought Joe Paterno’s career to a discomforting end, the cupboard wasn’t bare as much as it was decimated. Two years later, with O’Brien now coaching the Houston Texans, a foundation has at least been laid for Franklin to build upon.

He has a quarterback in place and doesn’t need to overhaul the offensive or defensive systems. There’s plenty of talent, just very little depth. So as the Nittany Lions begin preparations for their Aug. 30 season opener against Central Florida in Ireland, Franklin and his staff will focus on making the most of what little they have. That starts with sophomore quarterback Christian Hackenberg, one of the few Nittany Lions who opens camp with any job security.

“He competes with himself,” offensive coordinator John Donovan said. “We have a lot of guys in here who will be competing for jobs. He’s a guy who just wants to be the best. He’s going to do whatever he has to do to be great.”

A season ago, Hackenberg became the school’s first true freshman to open the season as the starting quarterback in more than a century. A year later, not only does Penn State not carry a senior quarterback, it doesn’t even have a junior.

“The transition from Coach O’Brien to Coach Franklin has been pretty smooth,” said Hackenberg, who threw for 2,995 yards and 20 touchdowns a season ago, leading his team to a 7-5 record. “We’re really excited about what coach Franklin brings to the table.”

Like O’Brien, Franklin will run a pro-style offense, so he’s been teaching terminology more than philosophy to his inherited bunch. Hackenberg said the transition thus far has been “smooth.”

“The parallels and the similarities between the way Billy [O’Brien] does things and the way we do things has been really helpful,” said Franklin, who compiled a 24-15 the past three seasons at Vanderbilt.

With an agile and quick quarterback, the Penn State offensive coaches can afford to open up the offense a bit and rely on a wide array of plays, utilizing Hackenberg’s unique skill set but also taking advantage of the tight ends and tailbacks. The team’s offensive line and untested receiving corps are among the least experienced — and least-heralded — in the Big Ten.

“We are looking for improvements from Hack, but I’m going to be honest with you,” Franklin said, “where our focus really is all the pieces to the puzzle around Hack.”

Even with a postseason ban, no shot at playing in the conference championship game this season and a coaching change, Penn State turned in the nation’s 24th-best recruiting class in 2014, according to Rivals.com. To fill out his roster, Franklin auditioned 175 students for walk-on positions. The result is an inexperienced squad, a reality Franklin has tried to leverage a bit. Unlike many other coaches, he has been able to honestly tell both new players on campus and potential recruits there’s plenty of playing time up for grabs.

While a lot of young players will have an opportunity to contribute this fall, coaches concede it’s difficult to guess which freshmen might emerge from the giant group, particularly at the linebacker and receiver positions.