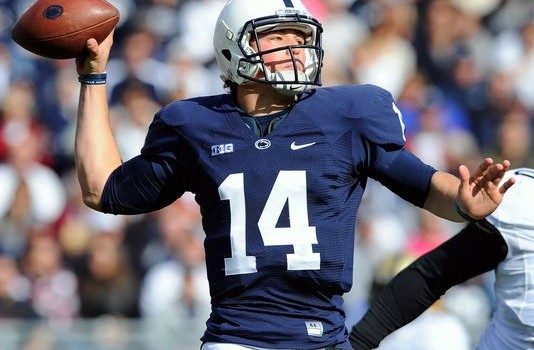 AT PENN STATE, A CHALLENGING DEBUT FOR JAMES FRANKLIN

We’ll look back and absolutely marvel at what Bill O’Brien was able to achieve despite the odds during his two seasons at Penn State. Rare is the coach who leaves after just 24 games yet avoids much of the coaching-change vitriol.

Beating Wisconsin in the finale was the high point. After dropping two in a row to begin his tenure, O’Brien-coached teams at PSU never suffered a multiple-game losing streak.

The Nebraska game was a low point, but let’s not ignore a 63-14 loss to Ohio State in October. And that note about avoiding losing streaks cuts both ways: PSU alternated wins and losses from the year’s third game through the end of the season.

Offense: The Christian Hackenberg show continues (photo above). It was a memorable debut: Hackenberg (2,955 yards and 20 touchdowns) stepped in as a five-star true freshman and met every expectation – if not exceeded expectations – in showing the sort of wise-beyond-his-years play rarely seen among major-conference rookies. He was careful, tossing just one interception for roughly every 39 attempts. He was productive, topping the 300-yard mark four times with five multiple-touchdown performances.

Hackenberg won’t have an all-everything receiver at his disposal. The Nittany Lions will have a hard time replacing Allen Robinson, a program great, and will be reliant on at least two true freshmen for depth purposes at the position. But there is a leader: Eugene Lewis (18 receptions for 234 yards) figures to assume Robinson’s role as Hackenberg’s go-to target despite his own inexperience; he really needs to get on the same page with PSU’s quarterback before the opener. Beyond Lewis, don’t be surprised at all if true freshman DeAndre Thompkins plays a bunch, thanks in part to his early enrollment, and redshirt freshman DaeSean Hamilton is coming off a strong spring.

So Hackenberg will have to lean heavily on his tight ends; good thing the Nittany Lions return a terrific group. There’s junior Kyle Carter (18 for 222), an easy all-conference pick when fully healthy – as we saw very clearly in 2012. There’s fellow junior Jesse James (25 for 333), an NFL-size contributor with the frame to simply bully opposing defenders along the back seven.

And the backfield is here to lend a hand. The Nittany Lions bring back the heart of last year’s ground game: Zach Zwinak (989 yards) and Bill Belton (803 yards) are now seniors, believe it or not, and sophomore Akeel Lynch (358 yards) flashed terrific burst and vision as last year’s third option. Wisconsin and Nebraska have better individual backs, to be sure – you know, Gordon and Abdullah – but PSU has to feel very positive about its options in the backfield. What really makes this unit work is how well each complements the other: Zwinak’s the bruiser, Lynch the speedster and Belton a hybrid of the pair. The issue? Hackenberg and these backs must produce behind a very raw and untested offensive front, and it’s easy to see the entire range of PSU’s skill players suffering should the line struggle against premier competition.

Defense: It’s funny to consider – since this is the place for linebackers – but PSU is in bad shape on the second level. The one sure thing is senior Mike Hull (78 tackles), who will move into the middle as Glenn Carson’s replacement. It’s also safe to pencil sophomore Brandon Bell, a potential-laden talent, into a starting role on the outside. But the Nittany Lions are really going to miss Ben Kline, a third projected starter who tore his Achilles late last month; injuries were an issue for Kline a year ago as well, but he was viewed as a linchpin on the outside. Instead, the Nittany Lions must turn back to Nyeem Wartman, who has been unimpressive in starting duty. Depth is also a concern: PSU will need snaps from two incoming freshmen to make ends meet on the second tier. While Hull will be an all-league pick, the Nittany Lions aren’t looking good at linebacker – and yes, I realize that’s a strange sentence.

It’s better elsewhere. The secondary has one spot to fill: PSU needs to find a starter to play opposite of cornerback Jordan Lucas (65 tackles, 3 interceptions), a rangy, athletic junior with a nose for the football – and a starter really poised to make all-conference noise if he can make last year’s off-and-on lulls a thing of the past. But Lucas can be so impactful that quarterbacks will be only too happy to look elsewhere, meaning juniors Trevor Williams and Da’Quan Davis – Williams the starter, Davis the top reserve – must deliver under pressure. For now, this is the secondary’s biggest concern. I’m not in love with the back end, but it’s totally serviceable: Adrian Amos (50 tackles) is a steady, seasoned hand, and Ryan Keiser is your typical walk-on success story – a somewhat limited athlete who makes the most of his skill set.

And if the Nittany Lions do struggle on the outside, Amos could always shift back outside to cornerback. If so, Shoop and PSU could promote Malik Golden, a really nice young talent, or Jesse Della Valle into a starting role. That’s actually not a bad idea, all things considered. And unlike many other groupings on this roster, I don’t worry about depth: Davis, Golden and Della Valle – if that projected quartet starts – are very solid as backups, and PSU adds as many as six incoming freshmen into the rotation come fall camp. I’m actually pretty high on this group.

No other unit defines this program’s current state more than the defensive line: PSU has a really solid top four but a questionable second tier. The starting group is strong across the board, beginning with ends C.J. Olaniyan (50 tackles, 11.0 for loss) and Deion Barnes (28 tackles). Olaniyan is going to fit really well into PSU’s scheme for the pass rush; Barnes has shown flashes of all-conference talent, though he’s coming off a fairly disappointing sophomore season. Inside, the Nittany Lions will team sophomore Austin Johnson with junior Anthony Zettel (16 tackles, 4.0 sacks), a converted end who added size without taking away an explosive first step. There’s no dominating interior presence here, unlike the last few years, but the top four is ready to roll. I just worry about the lack of depth, though perhaps JUCO transfer Tarow Barney will supply immediate assistance along the interior.

Michigan: Every game counts – this is Penn State, after all – but the Nittany Lions’ road toward bowl eligibility demands at least two wins away from home. One will be Rutgers; a second should be Illinois. But it’d be great to knock off Michigan in Ann Arbor, giving PSU the breathing room needed to tussle with Northwestern, Maryland, Ohio State and Michigan State inside the friendly confines.

We’re going to have to be realistic about what Franklin faces in his debut season. Penn State has issues, with none bigger than the lack of overall depth seen nearly across the board – in my mind, these Nittany Lions may face a number crunch tougher than either of O’Brien’s two teams. Things are rosy in the backfield, including quarterback, and fine in the secondary; things are worrisome on the second tier of the defensive line and the receiver corps; things are very questionable along the offensive line and at linebacker. To me, it’s the offensive line that should cause a sleepless night: PSU has Smith and nothing else, even if we must admit the potential for growth during the next 24 months is obvious – as we can also say at wide receiver.

It’ll pay to be pragmatic. Yes, the Nittany Lions have a smooth schedule; there’s always Ohio State, Michigan and Michigan State to consider, but the slate as a whole is conducive to a solid start. Yet I can’t ignore the areas where PSU comes up lacking, and can’t help but think this team – and this fan base, of course – should be very happy winning six or more games during the regular season. Conversely, I don’t think a seven-loss debut spells trouble in the least: Franklin’s going to get it done here at one point or another, even if this staff doesn’t hit the ground running from the start. But I wouldn’t think this team is finishing below .500.

Despite the problems, this team should win at least six games and as many as eight. Hackenberg is a star in the making, a foundational piece of the entire offense – and the face of the entire on-field team. The backfield is terrific. The receiver corps has enough athleticism to surpass my expectations. The defensive line is going to be a strength if the top four stay healthy. The secondary is another grouping set to exceed preseason projections. Yeah, the linebacker corps and offensive line will be an issue all year – that’s simply a fact, though Hand has worked wonders before. In total, this new staff is going to win games. What about 2014? Let’s be careful about planning for a major breakthrough. Bowl eligibility is the baseline, but this team isn’t equipped to make a 10-win finish out of this schedule.

Dream season: Penn State takes advantage of this schedule to go 10-2, dropping only games to Ohio State and Michigan State.