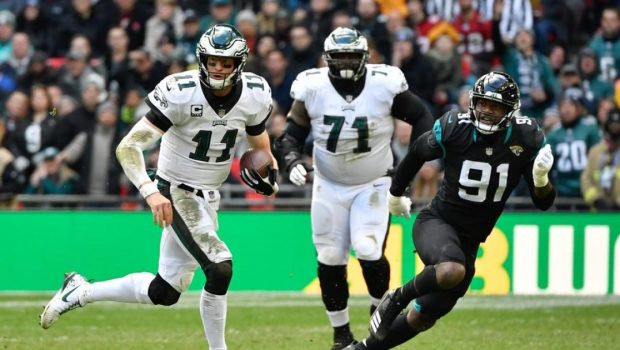 AT MIDPOINT OF NFL SEASON, EAGLES ARE 8TH IN POWER RANKINGS!

Ranking the Eagles this high is more about lingering respect than their play over the first half of the season, but I’m still not ready to write the champs off.

Carson Wentz has been exceptional in his past few outings, and the Eagles’ passing game should only get better with the addition of Golden Tate. A pass-catching group of Tate, Alshon Jeffery, Nelson Agholor, Zach Ertz, and Dallas Goedert has the potential to be a nightmare for opposing defenses.

Unfortunately, the Eagles defense has also been a nightmare at times this season.

Philadelphia failed to find any cornerback help at the trade deadline, so the team will field the same uninspiring group on the back end for the second half of the season.

This defense may never come around, but I’m still willing to bet on this loaded roster beating out the other teams in the NFC East:

0 thoughts on “AT MIDPOINT OF NFL SEASON, EAGLES ARE 8TH IN POWER RANKINGS!”