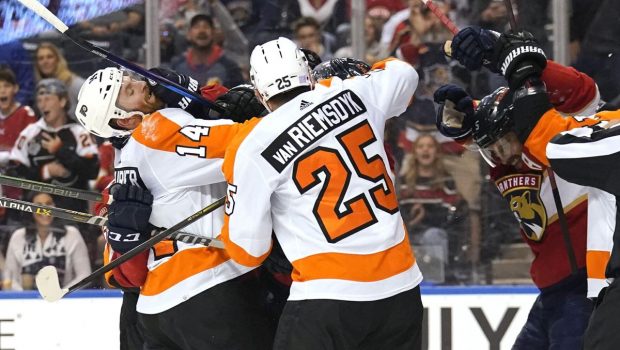 The Flyers have now gone six games without a win after Sunday night’s 5-2 loss to the New Jersey Devils.

And they were scheduled to play the Islanders tonight at the Wells.

But the NHL postponed it due to a COVID breakout on the Islanders, including Josh Bailey and Zdeno Chara. At least eight players have been affected. No reschedule date has been determined.

Which is too bad because the Isles are the only team in the Metro with a worse record than the Flyers.

With that postponement, the Flyers now have two days to work on their game before the daunting task of facing the upstart Rangers in New York.

The Flyers better get something going quickly if they want to remain competitive in the standings. “I thought killing that penalty at the beginning of the third gave us some momentum,” Farabee said after the game. “We got that goal there and we put ourselves right back in it. Just a few unlucky bounces, but we thought we gave ourselves a chance. Sometimes it just doesn’t work out.”

Ivan Provorov described the mood in the locker room.

“Obviously no one is happy right now,” he said. “We have to find a way to win a game. Don’t make as many mistakes as we did. We’re constantly giving up chance after chance every game. Our puck support has to be way better. We have to move faster, make decisions faster. Play better overall. There definitely have been some bad bounces, but we can’t use that as an excuse.”in it. You have to stay positive. There’s no one else coming in to help this group. We have to figure it out.”