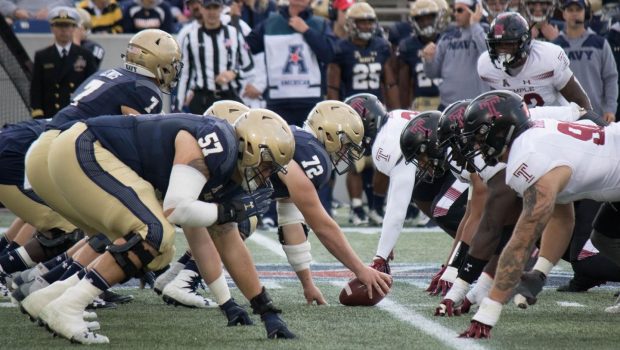 AT LAST, TEMPLE OPENS AT NAVY SATURDAY — THEN USF AT THE LINC!

Temple starts its 2020 season a little later than expected this Saturday playing Navy in Annapolis.

Kickoff is 6 pm and will broadcast on CBS Sports Network and 97.5 FM The Fanatic.

As Navy enters its sixth season in the AAC, Temple has been undefeated against their opponents from Maryland, winning all three conferencematchups so far.This week marks the beginning of Rod Carey ‘s second season after the Owls went 8-5 in his inaugural 2019 campaign.In this condensed COVID-19 season, the Owls are only scheduled to play eight conference games after members fromother conferences opted to cancel or postpone their seasons until the spring.The Owls enter the season after losing seven single-digit players, six of those to the NFL, three on the offense and fouron the defense.

The Owls got off to a strong start last season with wins over two ranked teams, #21 Maryland and #23 Memphis. The5-1 start included wins over Georgia Tech, ECU, and Bucknell, in the season opener.

The Owls Temple split their next six conference games to close out the season, winning games against Tulane and USF. Templefinished the regular season with a win over UConn before traveling to Annapolis, Md. to take on North Carolina in theMilitary Bowl, however, the Owls would lose that game to finish the season at 8-5.

Multiple Owls had career years as Anthony Russo threw for 2,861 yards, good for the third most in school history. The biggestbeneficiary of this was Jadan Blue , who set the school record for most catches (95) and most yards (1,067) in a singleseason. On the defensive side, Quincy Roche tied the school record for most sacks (13.0) in a single season, whileShaun Bradley led a defense that ranked 15th nationally in tackles in loss.The last time Temple and Navy faced off was on October 13, 2018 at Navy-Marine Corps Memorial Stadium. The Owlscame out on top in a tightly-contested 24-17 victory, thanks in large part to a 62-yard touchdown pass from AnthonyRusso to Ventell Bryant midway through the fourth quarter. This game marked the first time that Russo threw for over300 yards in his career, with 147 of those going to Bryant. The win pushed the Owls to 4-3 on the season and to 3-0in conference play on the way to a (8-5, 7-1) season overall.The Owls will be back in action next weekend when they make their 2020 Lincoln Financial Field debut against SouthFlorida on October 17. Kickoff will be at 12:00pm and will air on ESPN+.