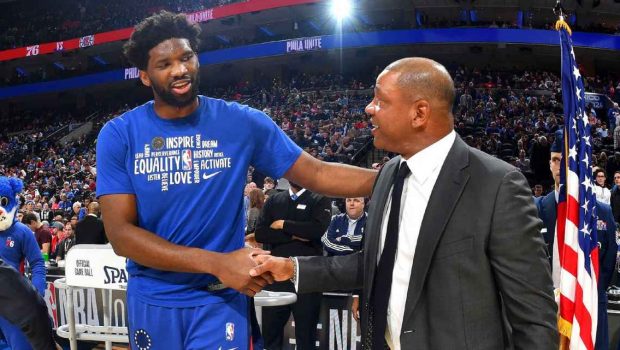 AT LAST, SIXERS HAVE A SERIOUS WINNER AS THEIR COACH!

So, Doc Rivers, you could have coached elsewhere or taken your talents to TV.

Why did you pick the Sixers coaching job?

Rivers was introduced as new head coach, citing it as too good of an opportunity to pass up.

“I love coaching. I absolutely love it,” Rivers said on a video conference call with reporters from the practice court inside the team’s Camden practice facility. “But I was not going to just coach anybody, I can tell you that. I was ready to take a break … it just depended on the team that was available, and if that team in my opinion was ready to win.”

He met with the Sixers, and that it quickly became clear to him that the team’s talent, led by All-Stars Joel Embiid and Ben Simmons, made this a job he simply had to take.

“When [general manager Elton Brand] called, it was an easy ‘Get on the plane and take a look’ for me,” Rivers said. “You look at these players, these young players, and their potential … the fact that they’ve had so much success in so many ways at the ages they are already, and where I think they can go, for me it’s a job you just couldn’t turn down.

“That’s why I’m here. Just really excited about it.”

The Sixers roster is full of talent, led by the Ben Simmons-Joel Embiid pairing that Rivers immediately identified as worthy of making him choose to forgo a break from coaching and instead dive right back in again.

“They’ve won 65% of the games they’ve played,” Rivers said, referring to Simmons and Embiid, “so it clearly works when they play together. … this team is loaded with talent. We just have to figure out how to make it work the best.”

That was something Philadelphia was never able to do last season — beginning with the fit between Embiid and Al Horford, his prior rival with the Celtics. Instead of them mauling opponents with their size and skill, the two big men mixed like oil and water when they were together on the court, with the Sixers looking far better when just one of them was out there.

Ultimately that led to Horford being removed from the starting lineup regularly for the first time in his NBA career, although he did return to it after Simmons was hurt. That, in turn, has led to plenty of speculation about whether Horford will still be with the team next season, or if he’ll be sent elsewhere to attempt to better balance out the roster.

When asked about the possibility of them starting together again next season, Rivers artfully dodged the question.

“I don’t know that yet,” he said. “I will say this, at some point they’ll absolutely have to play together, but I can’t tell you what my starting lineup is going to be on the first day of my job. I just need more time for that.”

Rivers was also asked about the two ongoing storylines that have enveloped the Sixers over the past few seasons: getting the most out of Embiid, and getting Simmons to shoot. Referring to Embiid, Rivers said he’s excited about the possibilities of what coaching him will look like, and that he believes Embiid “will be a dominant big man for me.”

“Joel is an amazing talent,” Rivers said. “Having coached Kevin Garnett and different guys, [DeAndre Jordan], [Kendrick Perkins], just so many different levels of bigs … and, in this generation, that level has changed even more now that they’re out shooting 3s and, in some cases, even running the offenses of teams.

“I think Joel can do all those things. Watching him on film the last couple days is exciting, I can tell you that. I remember a game, I think it was three years ago, in L.A. that he came in and had a dominant performance. I think he is a dominant big man, and will be a dominant big man for me.”

Simmons, on the other hand, has become an All-NBA talent all while lacking a reliable jump shot — and, for the most part, proving unwilling to even attempt them. That began to ever-so-slightly change inside the bubble, as Simmons made a couple of corner 3-pointers before getting hurt.

But, just like Brown repeatedly did, when the topic of Simmons’ jump shot came up, Rivers immediately downplayed the importance of its absence from Simmons’ game and instead highlighted the many other things his new star can do.

“I’m not that concerned by it like everyone else is,” Rivers said. “I really am not. I’m concerned about figuring out the best way to win and if it takes doing all that, then we’re going to figure that out.

“Again, I’m so much more concerned about team scoring than about individual scoring. Individuals can create scoring, right, and Ben has proven that he’s a guy that can create scoring whether that’s him doing it or him creating scoring for anyone else on the team. But this is what I know about Ben: He’s an All-Star, he’s an all-defensive player.