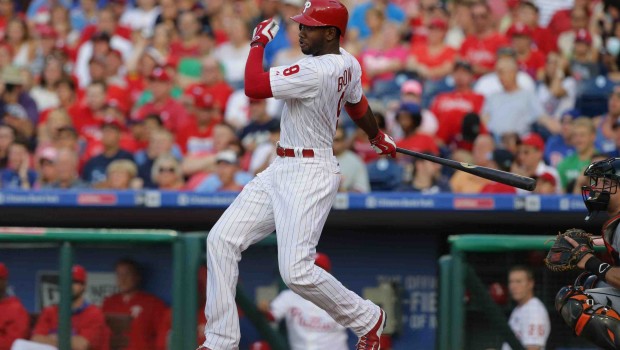 AT LAST, PHILLIES OFFICIALLY GIVE UP ON OVERRATED DOMONIC BROWN!

It turns out that there was nothing that Brown could do for the Phillies.

Forgive the reference to the UPS advertising slogan, but the Phillies finally admitted yesterday that Domonic Brown, once their prized future star, had no future with the team.

The Phillies gave Brown an outright release from their 40-man roster, effectively ending his nine-year career with the organization. Brown, 28, made the 2013 National League All-Star team, three years after he had been considered one of the top prospects in baseball, but he had struggled since.

As MLB.com pointed out, Brown had a .650 OPS from the 2013 All-Star break through this season, which ranked 289th out of 339 qualified hitters in baseball, and 16th lowest among 133 outfielders. That, combined with the emergence of other outfielders in the system and his second year of salary-arbitration eligibility, made his departure a certainty. Brown has the right to decline an assignment to the Minor Leagues and become a free agent, which is expected.

The Phillies also outrighted prospects Tommy Joseph and Kelly Dugan and outfielder Brian Bogusevic. The Phillies acquired Joseph in July 2012 from the Giants in the Hunter Pence trade, but concussions derailed a promising catching career. Joseph, who remains under the Phillies’ control next season, moved to first base this year, and the Phillies remain hopeful he can produce enough offensively to become an option at first base in the future.

Brown’s exodus is the most notable of the Phillies’ latest roster purge. Just a few years ago, the Phillies believed they had a superstar in the making in the 20th-round selection in the 2006 Draft. But other than a strong first half in 2013, Brown never lived up to the hype.

He was ranked No. 4 among all prospects in 2011. Two of the three players ranked ahead of him were the Angels’ Mike Trout (No. 1) and the Nationals’ Bryce Harper (No. 3).