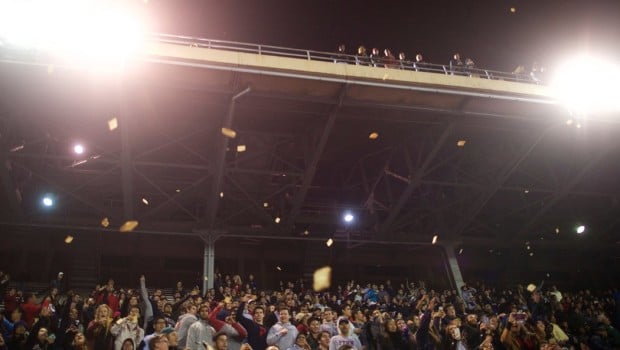 HERE’S A TOAST FOR DEAR OLD PENN, CO-CHAMPS OF THE IVY LEAGUE!

Greer Cheeseman, a former Penn student, was to direct the band in another lively rendition of “Drink a Highball” on Saturday when the Quakers played Cornell, a game Penn won, 34-21, to take home a share of the Ivy League title with Dartmouth and Harvard. Cheeseman said he was among those who discovered a way to show spirit without spirits after less-than-jolly administrators adopted the no-highball policy.

Cheeseman and some friends got their idea during a midnight showing of “The Rocky Horror Picture Show” in downtown Philadelphia. At one point during the film, an actor offers a toast. That prompted veteran attendees to unload toast in the direction of the screen.