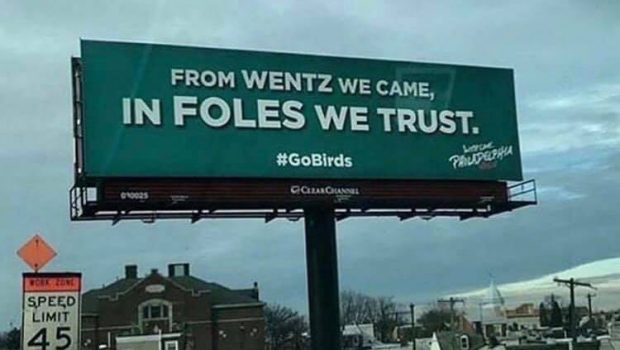 AT 8, EAGLES ARE A DOG THAT THE PUBLIC IS LOVIN’ TO BET!

Standing above all of this weekend’s teams as a betting curiosity are the Eagles and, more specifically, quarterback Nick Foles.

The Eagles (10-7), who had to win their last three games just to earn a wild-card berth, are drawing a whopping 71% of bets for their game in New Orleans against the Saints (13-3).

The overload may be because Philly is getting a generous 8 points from the bookies.

That percentage number was only 65% on Monday.

New Orleans tied the Rams for the best regular-season record in the NFL this season, and the Saints walloped the Eagles, 48-7, at New Orleans in November for their ninth victory in a row, dropping the Eagles record to 4-6.

But that was before Nick Foles replaced the injured Carson Wentz at quarterback for the second time in two years, and Foles has led Philly to four straight victories, including a 16-15 playoff triumph over Chicago that was only cinched on a missed late Bears field goal.

Mason says, “As far as the Eagles are concerned, the 8-point spread is all about their opponent and where they are playing—the Saints in the Superdome. Throw out their Week 17 loss against the Panthers when they benched some key players, and the Saints were 6-1 at home with four of those wins by double digits, including their Week 11 victory over Philly.”

All three victories in the playoffs were as an underdog, and the Eagles were favored to lose by 4 points to the Bears. The Saints and veteran quarterback Drew Brees are formidable, but the Saints won their division on Dec. 9 and home-field advantage on Dec. 16.

Since Brees and the Saints won their last playoff game, Foles and Philadelphia have won four playoff games. New Orleans could very well win comfortably again over the Eagles, and the point spread has stayed at 8. The Chargers and Colts are getting fewer points.