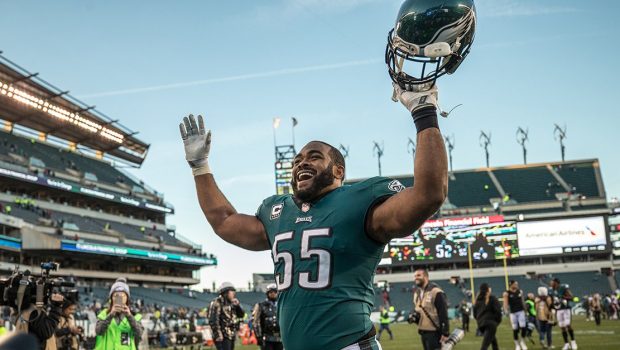 AT 31, BRANDON GRAHAM IS EAGLES D-LINE’S VET WITH AN ATTITUDE!

“I’m glad it worked out,” the 31-year-old Brandon Graham said in training camp. “It did surprise me because I know how the Eagles are. They want to stay young, so I was happy they valued me.”

All of a sudden, Graham has become the greybeard of the defensive line.

“We had a lot of veteran presence stuff we learned from,” explained Graham, who hobbled through the 9-7 2018 season on a surgically-repaired ankle. “We think we can take those things we learned and add our own little flavor to it with different people.

“There’s a lot of excitement to see how it all fits and comes together in the pre-season and how we handle adversity.”

“Being healthy now we can focus on getting in shape together,” said Graham, who’s recorded 42.5 sacks, 76 tackles for losses and 16 forced fumbles since the Eagles moved up in the 2010 draft to take him at No. 13, just ahead of perennial Pro Bowl safety Earl Thomas. “Because last year some people like me were kind of behind and trying to get in shape as he season was getting here.

“Some people were hurt and trying to catch up and some were already there. It was kind of an off-balance thing. I gave them everything I had, but sometimes everything I had was not as good as I would’ve liked.”

The D-line has some familiar faces—Pro Bowl defensive tackle, Fletcher Cox, DT Tim Jernigan, who’s a man on a mission after the Eagles opted out of his $11 million contract and he chose to return on a bargain $2.5 million deal, along with Vinny Curry, who found the grass wasn’t greener during his one year away in Tampa Bay. After the Bucs opted out of the bulk of Curry’s three-year, $27 million contract, he, too, is back in the nest where he spent his first six seasons.

“I’m cool being under the radar.” said Graham, whose key fourth-quarter strip sack of Tom Brady in the Super Bowl has earned him a permanent place in Eagles’ lore. “Don’t give us anything. We just have to go out there and take everything.

“Everybody’s worried about the offense But we get to go against them every day and I think we complement them very well.

“I just think the offense always gets the love because offense wins games.”

Perhaps, but don’t they always say defense wins championships? In that case, Graham is ready for the challenge. He’s also eager to pass on what he’s learned over the years to the next generation, just as veteran Trent Cole passed it onto him a decade ago.

“We can all help each other,” said No. 55, who’s earned $43.7 million for his career so far. “I tell guys always come ready to learn and be coach-able.

“I used to see Trent Cole come to work every day when we had real two–a-days (since outlawed under terms of the the collective bargaining agreement). I can tell any rookie coming in just listen to the coach because most of the answers to the test come in film study.

“A lot of people’s egos get in their way. I try to let them know if you’re a coach-able guy—even if it’s not here—they can put in a good reference for you somewhere else,”

Of course, there’s no need for Brandon Graham to seek references. The most tenured member of the Eagles’ defense believes he’s still got plenty left in his tank—even after 10 seasons. “Honestly being at 10 (seasons) I don’t feel like it’s bad,” said Graham. “I don t feel like I’m fighting my body because I’m getting up in age

“I’m getting better with time. It’s all on me how I prepare and take care of my body, because as you get older you tend to think you can get away with certain things because you know a couple of tricks.

“But the trick is if keep your body right it will pay you back later.”

The thing is, by committing $40 million over the next three years to Brandon Graham, over $63 million to Fletcher Cox through 2022, three-years and $30 million to Malik Jackson—and that’s just on the defensive line—the Eagles are hoping that payback comes just a bit sooner.