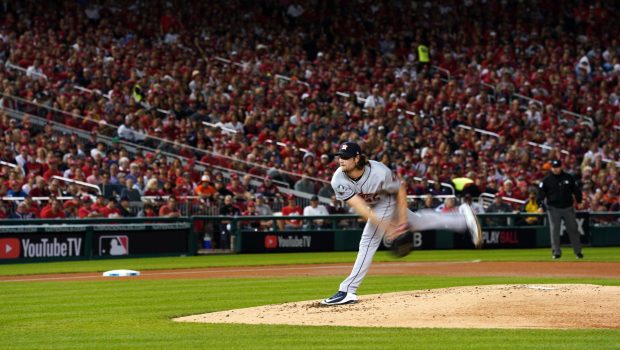 ASTROS GO UP 3-2: FOR NATS FANS IT’S ALL OVER BUT THE POUTING!

The Houston Astros won last night’s World Series Game 5, 7-1, and they are the ones surging toward what would be their second championship in three years.

Not only did the Washington Nationals lose all three games at home this weekend, they only scored one run in each game and were outscored 19-3 over all, leaving their loyal fans dispirited and disappointed.

“We feel terrible about that,” said Nationals reliever Sean Doolittle. “They waited how many years for a World Series? That’s frustrating.”

Much of their frustration in Game 5 was caused by Gerrit Cole, the Astros’ starting pitcher who returned to form with a magnificent performance.

Cole did not have his best stuff last week when he took the loss at home in Game 1, and much of that was due to his lack of feel for his off-speed pitches. But on Sunday he threw them all with conviction, in any count, leaving the Nationals’ batters with few chances to do anything productive.

In what may have been his last appearance for the Astros (he will be a free agent after the season) Cole dazzled through seven terrific innings, allowing only three hits, including a home run to Juan Soto in the seventh. He issued just two walks — one on a suspect call by the home plate umpire Lance Barksdale — and struck out nine, giving him 47 strikeouts this October. That tied him for second-most in a single postseason.

The game was supposed to feature a tantalizing pitcher’s duel, but that fizzled hours before the game when the Nationals ace Max Scherzer had to be scratched because of severe upper-back and neck spasms. Joe Ross became the emergency starter and performed admirably — allowing five hits and two walks in five innings — but could not contain the surging Houston offense.

Yordan Alvarez and Carlos Correa each hit two-run home runs off Ross, and George Springer added another a two-run blast off Daniel Hudson in the top of the ninth.

On Tuesday in Game 6 the Astros will send Justin Verlander, who is 0-5 in the World Series in his career, against Stephen Strasburg, who is 4-0 with a 1.93 earned run average this postseason, in a marquee matchup in Houston.

“We’ve got Stephen Strasburg on the mound,” Washington Manager Dave Martinez said. “I like our chances.”

Ross’s night began on a positive note, as the fans in Washington lent him their full support with emphatic cheers when he was announced before the game (that was not the case for President Trump, who attended the game in a suite behind home plate and was booed loudly when he was announced during the third inning).

But Cole kept the fans quiet for much of the game.

“He was unbelievable,” Springer said. “He brings an intensity, a tenacity. He showed up today and it was business from the time he got here until the time he came out of the game. Just lights out. He gave everything he had on every single pitch and threw. It was special to watch.”

Soto’s home run in the seventh inning was his second off Cole in the series, and it seemed to put the Astros’ right-hander on edge. Two batters later, he thought he had struck out Ryan Zimmerman looking at a 3-2 pitch that would have ended the frame. But it was called a ball, and Cole had to stop himself from running toward the dugout, his displeasure with Barksdale clear.

But one batter later, Barksdale called Victor Robles out on a strike-three pitch that looked even farther outside than the called ball to Zimmerman — perhaps a makeup call. The fans booed lustily once more, but Cole was out of the inning and it was his last batter of the night, and likely his last for the season.