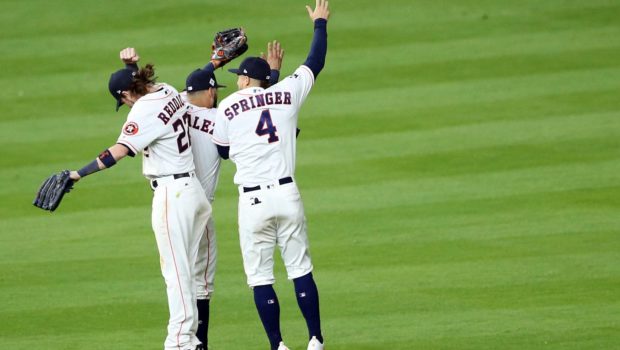 The Houston Astros fed off a loud orange-clad crowd at enclosed Minute Maid Park and made an early outburst against Dodgers starter Yu Darvish stand up while Lance McCullers and Brad Peacock combined to throw a four-hitter in Houston’s 5-3 win in Game 3 of the World Series.

“All the fans have been outstanding during the postseason,” Peacock said. “And to tell you the truth, when I was out there a couple of times, I got the chills from them screaming so loud. That was an unbelievable feeling. They got me going, and I’m just glad I was able to get it done, for sure.”

The Astros took a 2-1 lead in the best-of-seven Fall Classic by becoming the eighth team in history to win at least seven home games in a postseason (7-0). The previous seven clubs won the World Series, and the Astros can become No. 8 if they win Games 4 and 5 at Minute Maid Park on Saturday and Sunday.

“You saw the Indians last year get a 3-1 lead and then it didn’t happen for them. We don’t want to get carried away,” Astros shortstop Carlos Correa said. “We want to stay confident and focused at the same time and try to go out there and win these last two games [in Houston].”

Darvish, who had allowed just two runs in 11 1/3 innings in two previous postseason starts, and had been 4-1 with a 2.16 ERA in six career starts at Minute Maid Park, gave up four runs and six hits while inducing just one swing and miss in the 49 pitches he threw.

“The fastball command wasn’t there, and the slider was backing up,” Dodgers manager Dave Roberts said of Darvish, who was 4-0 with a 0.88 ERA in his five previous starts. “So he just really didn’t have the feel and couldn’t get any type of rhythm going.”

McCullers, who threw four scoreless innings in relief of Charlie Morton in Game 7 of the American League Championship Series a week ago, allowed three runs, four walks and four hits in 5 1/3 innings before turning the ball over to Peacock, who slammed the door on Los Angeles by throwing 3 2/3 hitless innings for the first save of his career.

“I think it’s just guys going out of the strike zone,” Roberts said of his offense, which was 0-for-7 with runners in scoring position. “You look at the opportunities that we did have, and pitchers seemed to go to their secondaries. When we are at our best, or any offense is at their best, they stay disciplined in the strike zone, and right now we’re chasing a little bit more than we usually do.”

The Dodgers conceded they played a sloppy game, committing two errors and having Yasiel Puig thrown out at second when he decided late to try for the extra base after running through first on a grounder down the third-base line.

“We didn’t play a very good game at all,” said shortstop Corey Seager. “We threw some balls away, kicked some balls around to let them advance. They scored on some. We can’t let that happen. We’ll figure it out. We’ll get ready. And we’ll get back to playing good ball.”