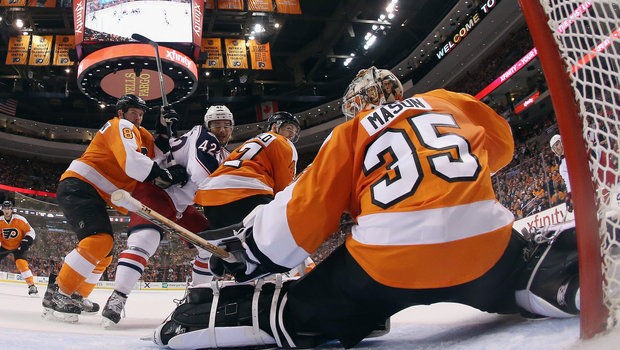 ASSESSING 2015-16 FLYERS BY POSITION: THE CUP IS STILL YEARS AWAY

The Flyers open training camp next week at the Skate Zone in Jersey, and it will be fascinating to see how new coach Dave Hakstol adjusts from North Dakota to the NHL.

Our friends at ESPN.com have taken a look at the 2015-16 team and we present it for your consideration:

Strong top-four defense, anchored by No. 1: Someday when Ivan Provorov, Travis Sanheim, Samuel Morin and Robert Hagg are manning the defense, the Flyers might qualify here. Just not yet.

Playoff-tested goalie: Steve Mason has played in just nine career playoff games, and four of those came while he was a 20-year-old goalie for an over-matched Blue Jackets team facing a powerhouse Red Wings team in 2009. Mason has proven to be an above-average NHL starter, but his playoff resume is still thin.

Playoff-proven coach: GM Ron Hextall made one of the most intriguing offseason coach hirings in bringing in Hakstol. Like the young players coming in Philly, Hakstol needs time to develop as an NHL coach.

Total: 1 out of 5. The rebuilding under Hextall continues.