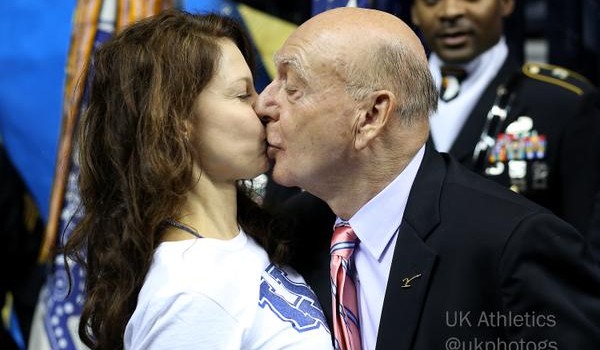 Fastphillysports.com posted this photo yesterday of Dick Vitale planting a wet one on Ashley Judd.

Lots of folks were grossed out by the image, and some wondered if Judd was as enthused about the lips-to-lips moment as Dickie V presumably was. Not to worry, Judd told MSNBC’s Thomas Roberts on Monday, she was just fine with it.

The actress/Kentucky superfan was on Roberts’s show to plug a couple of film projects, as well as to gab, of course, about her beloved Wildcats and the upcoming NCAA tournament. Roberts steered the conversation toward the kiss, telling Judd, “You don’t look like you’re too into it.”

“Dick Vitale is one of my favorite human beings,” Judd told the MSNBC host. “He is an advocate of the sport that I love. … And we became friends at the Southeastern Conference tournament.”

Judd then patted her cheeks and said that her “mother and sister always used to do this thing when they were taking a picture with someone, right as the snap was made, they would kiss on the cheek. So I did that with Dick, and he’s, like, an uncle to me, I adore him and his wife is one of the most lovely human beings.”

Well, Judd might be the only one who thinks that she was getting kissed on the cheek there. Nevertheless, she said she was “disappointed that it’s been misinterpreted.”

Only surprise in my planting one on dear @DickieV is I’ve adored him for 10 years. At thrilling UK games I’ve been known to kiss strangers!

On a more serious note, Judd mentioned that, during the same Kentucky game against Arkansas for the SEC championship, she posted an “impassioned” tweet which claimed that the Razorbacks were “playing dirty.” That tweet got her a number of vulgar replies, in which she got called all sorts of vile names, and the actress said that she would be “pressing charges.”

When when I express a stout opinion during #MarchMadness I am called a whore, c—, threatened with sexual violence. Not okay.