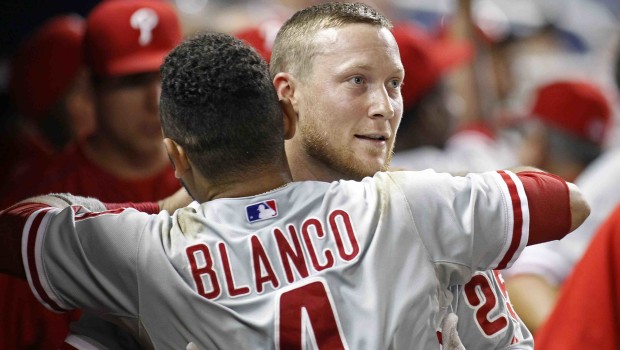 The Phillies may be playing out the string as they try to avoid losing 100 games this season, but Cody Asche has something to prove:

That he deserves to be taken seriously for 2016.

Aaron Harang shut down the Marlins and Asche belted two homers, as the Phillies defeated Miami, 6-2, in Tuesday’s series opener.

The Phillies jumped ahead, 3-0, on a second-inning Freddy Galvis two-run single. Asche then hit solo homers in the fourth and eighth inning (his 10th and 11th of the season), while Darin Ruf launched a seventh-inning solo shot. That would be enough for Harang, who allowed only two runs in seven innings. The 37-year-old last pitched in Miami on Aug. 22 when he also surrendered just two runs in seven innings that day.

“Cody Asche had a pretty good day,” said Phillies manager Pete Mackanin, who signed a contract extension through next season before the game. “Today was his day. I told him to go and buy me some lottery tickets.”

Miami starter Tom Koehler (10-14, 3.94 ERA) went just five innings, allowing four runs (three earned) on seven hits. Miguel Rojas hit his first homer of the season — a two-run blast in the seventh inning — but that was it for the Marlins, who have lost four straight.

“It was a struggle from pitch one,” Koehler said. “It’s unfortunate. I didn’t really give the guys a chance tonight to get something going offensively.”