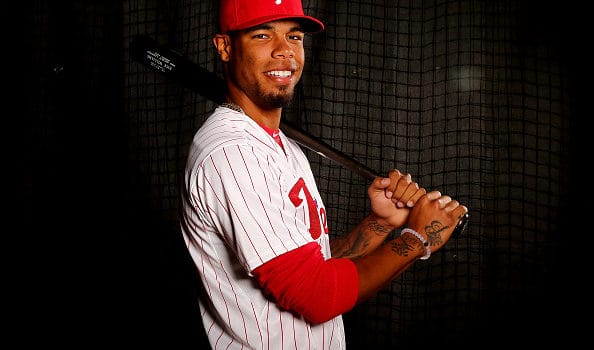 AS PHILLIES SINK, THEIR HOTTEST PROSPECTS ARE JUST A CALL AWAY!

The Phillies, who started 24-17, are sinking like a boulder in the standings, and Phillies fans are wondering:

When are we going to see the hot prospects we have heard so much about?

MLBPipeline.com ranks J. P. Crawford as the No. 3 prospect in baseball, while Nick Williams (above) checks in at No. 58. They are ranked as the Phillies’ Nos. 1 and 3 prospects, respectively.

“We recognize with J.P. that he’s 21 years old, he just got to Triple-A a month ago and he’s still very much in the development phase of his career,” GM Matt Klentak said before last night’s game against the D-backs. “Nick’s 22 years old in Triple-A. He and J.P. both are among the youngest in that entire league.”

Crawford, in a month with Lehigh Valley, has struggled, posting a .556 OPS through his first 24 games and 90 at-bats. On Wednesday, Crawford had his best game since being promoted, going 3-for-3 with a pair of doubles.

Williams, after getting off to a slow start, has improved of late. He’s hitting .284 with seven home runs in 215 at-bats, though he still has a 60/15 strikeout-to-walk ratio. IronPigs manager Dave Brundage benched Williams the past two games for showing a lack of hustle. He didn’t directly consult with Klentak on the decision, but the Phils’ GM was aware and doesn’t believe it will be an issue going forward.

Klentak is in no rush to get players to the big club. He needs to see them develop and, preferably, he said, get a full season’s worth of at-bats at one level. Williams spent all of 2015 at Double-A. Between 2015 and ’16, Crawford got close to 500 ABs with Reading.

There are scenarios, though rare, in which a player can force a promotion. Dylan Cozens, rated by MLBPipeline.com as the Phillies’ No. 22 prospect, could be making that case at Double-A Reading. He has slugged 19 home runs in 252 at-bats while maintaining a .294 average.

Still, Klentak said there are no imminent plans to promote Cozens to Triple-A.