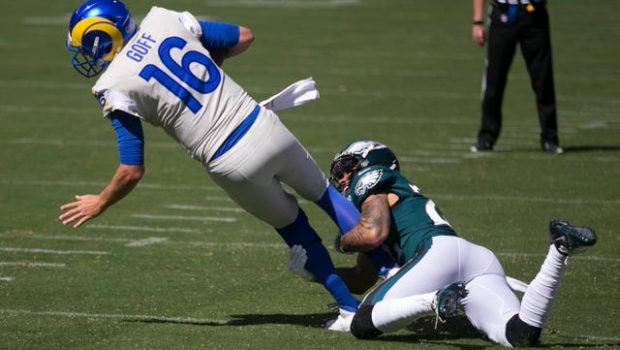 AS BAD AS THEY ARE, EAGLES STILL ONE OF 2 BEST TEAMS IN NFC EAST!

What a start, three time zones from home: 12 of 12 for 145 yards and two touchdown passes, leading the Rams to a 21-3 first-half lead at flawed Philadelphia.

And for the second straight week, Goff led the Rams to a win over one of the two best teams in the NFC East.

He finished with three TD passes, all to tight end Tyler Higbee, and he’s rapidly dispelling doubts about his ability brought on by his 16-pick season last year.

Great game for Goff in a tough place to play—made very much easier by the no-fan edict.

For the record, the Cowboys and WFT lead the NFC East at 1-1, and the Eagles and Giants are at 0-2.