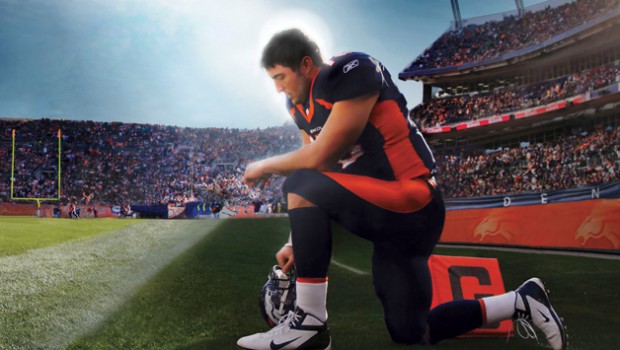 AN ARTICLE OF FAITH: THE INTERSECTION OF FOOTBALL AND RELIGION Herb Lusk (left) knows whereof he speaks: He was a running back for the Eagles in the late 1970s; his ministry at Greater Exodus Baptist Church and Broad and Fairmount; and also by virtue of the fact that he currently serves as the Eagles’ team chaplain.

And, most importantly, although Tim Tebow is the latest and greatest in the Taking a Knee for God game (photo above), Herb Lusk was the first.

Last Monday was a blur in Eagles Nation.

The Eagles signed Tim Tebow and the whole world was commenting on it, criticizing it, drinking it all in and, of course, making money on it. The fine people at Philly Pretzel Factory confected one of their delights in the shape of Tebow doing what he evidently does best:

It is an article of faith that, even among those of us who think Tebow will not contribute much to the Eagles in 2015, he has certainly dominated the dialogue when it comes to the intersection of football and religion.

And since the NFL has become so popular that it is a secular religion to millions, Tebow is a lightning rod for controversy.

Haters can hate, as Taylor Swift says. But even the demure and talented pop star doesn’t generate the garbage that Tebow does:

“His mechanics are all wrong.”

“Why does the media fixate on him when there are so many others who deserve the attention?”

“What’s up with that prayerful pose after he does something right?”

That’s what really pisses off a lot of fans:

Why in God’s name does Tebow have to make such a big deal about praying?

And why do the TV cameras have to ram it down out throats?

I get that Tebow is a marginal player at best, but I think so much of the antipathy toward him is based on the fact that religion plays a major part in his life, on and off the field.

I was thinking about Tebow when my phone rang, and it was Rev. Herb Lusk, who has thought long and hard about that question.

Rev. Lusk was calling from Memphis, where he was burying his sister Reola, who had died at the awfully young age of 57. Herb Lusk knows whereof he speaks by virtue of his play as a running back for the Eagles in the late 1970s (left), his ministry at Greater Exodus Baptist Church at Broad and Fairmount, and also by virtue of the fact that he currently serves as the Eagles’ team chaplain.

Herb wasn’t calling to discuss the nexus between football and God, but to point out that, although Tebow is the latest and greatest in the Taking a Knee for God game, he — Lusk — was the first.

Of course, he is right.

As documented in the Washington Post in a 2007 article:

The play was 48 Toss, and 30 years later, Dick Vermeil remembers it as if he called it last Sunday. Herb Lusk took a pitch from Ron Jaworski, headed around left end and breezed unscathed 70 yards for a fourth-quarter touchdown. Four steps over the goal line at Giants Stadium, the Philadelphia Eagles’ running back rewrote the playbook. Alone in the end zone, with a crowd of 48,824 looking on, he celebrated with a gesture in what has since become a watershed moment in American sports.

With little ceremony and no advance warning, Lusk kept his eyes straight, dropped to his left knee and bowed his head in prayer. A few seconds later, he stood back up and returned to the sideline, his legacy sealed.

“Herb Lusk was the first NFL player to kneel in the end zone and pray,” said Steve Sabol, president of NFL Films, which has footage of more than 9,000 games played since 1894.

It was Lusk’s second touchdown of the day. His first was a one-yard score in the first quarter. He went to one knee on that one as well, but in a pack of celebrating teammates, few noticed what he was doing. His second score, which put the wraps on a 28-10 Eagles win, was a clear public display.

The gestures went unremarked upon, for the most part, that Sunday, Oct. 9, 1977. A couple of reporters asked Lusk about it after the game, but didn’t make mention of it in their stories, instead focusing on how Lusk’s 117 rushing yards helped the Eagles win. Nobody, not even Lusk himself, thought such a seemingly quiet, personal moment would eventually become apparent today at every level of competitive sports, whether it be a pitcher pointing skyward after a save, a hitter offering thanks to a higher power after a home run, or a basketball team joining for a prayer at midcourt after a game.

While historians have pointed to prayer being fused with spectator sports as far back as the early 20th century, Lusk was the one credited with making on-field prayer a mainstream act 30 years ago, so much so, it earned him the nickname “The Praying Tailback,” according to Sabol and Lusk’s former Eagles teammates.

“That day is pretty much a blur to me,” said Lusk, speaking from his office at People for People, the social service arm of Greater Exodus Baptist Church in Philadelphia, where he is pastor. Lusk founded People for People in 1993. “I’m very proud of when I look and see guys praying in the end zone or praying after [a game]. I see these guys as my sons. I gave birth to them. I see that as my purpose for playing in the NFL”.

Teams and players had long conducted prayer before and after games, but out of the public eye. What historians believe Lusk’s act did was show athletes that a highly personal action could be shared publicly.

“I don’t know if there was hesitancy to do it back then, but [athletes] weren’t as impulsive as they are today,” said Vermeil, Lusk’s coach at the time, who added that he noticed a huge increase in on-field prayer during his broadcasting career in the 1980s. “He kind of initiated this movement. . . . It freed a lot of people to express themselves.”

Richard Lapchick, founder of the Center for the Study of Sport in Society at Northeastern University and now the director of the DeVos Sport Business Management program at the University of Central Florida, said Lusk put religion in a new light for athletes.

“It added macho credibility to it,” Lapchick said. “Up to that point, it was, ‘Is this guy really serious’ ” about religion?

So, if Tim Tebow makes the 53-man squad and scores a touchdown, followed by his famous Tebowing kneel to God, remember that Herb Lusk did it first!

One thought on “AN ARTICLE OF FAITH: THE INTERSECTION OF FOOTBALL AND RELIGION”