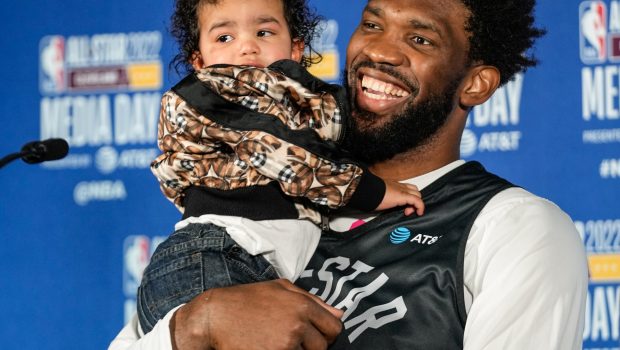 Sixers center Joel Embiid has no problem talking about himself and his MVP season.

But yesterday, at the All Star media avail in Cleveland he was upstaged by his son, Arthur, named after his late brother and born in September 2020.

“I don’t want to push for the whole thing, but the way I’ve been playing speaks for itself,” Embiid said.

“Especially with everything we went through, the drama this whole year, obviously missing a big piece and then everything that happened to our team and the way our team is set up.

“So I knew had to take my game to another level whether it was offensively, defensively or playmaking and I’ve got great teammates that are coming in every single day and giving their all on the floor. But it always goes back to winning. As long as we win I’ll be at that level and have a chance to win it all and win the MVP.

“But to answer your question, the play speaks for itself. Every single night that’s what I’ve been doing offensively and defensively and I don’t plan on stopping.”