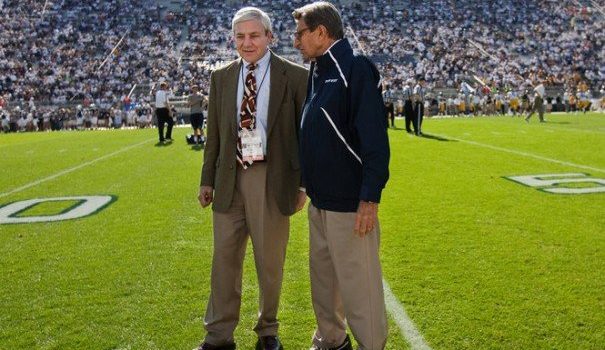 ARROGANT EX-PSU PRESIDENT SPANIER SHOULD HAVE TAKEN A PLEA!

Former Penn State president Graham Spanier was found guilty of endangering the welfare of children, a charge that carries a sentence of up to five years in prison, for the now 68-year-old administrator.

Sentencing will take place late this spring in Harrisburg.

Spanier was found guilty after his defense offered no defense in his case, calling no witnesses, let alone Spanier himself.

It foolishly believed the jury would agree with them that state prosecutors hadn’t proven what was a challenging case. That he was found not guilty on a separate conspiracy charge is a moral victory that will ring hollow if he ends up behind bars, where he would be known as Jerry Sandusky’s protector.

That Spanier misread the mood of the jury and placed too much belief in others’ ability to see the intricacies of his defense pretty much says it all.

Two of his co-defendants, former athletic director Tim Curley and former vice president Gary Shultz, wisely took plea deals last week, admitting guilt on endangerment charges. As such, they will likely receive only house arrest at most. They, too, will be sentenced at a later date.

Spanier decided to fight. Only not with everything he had.

The case was complicated. For instance, the endangerment conviction stems from an incident when Sandusky was a former employee, a retired defensive coordinator, not a current one. Was Spanier really responsible for anyone who stepped on Penn State’s expansive campuses across the Commonwealth?

The fact the state was willing to offer leniency to Curley and Shultz, who clearly had more direct culpability than Spanier, suggested how much prosecutors needed their testimony to win.

The sordid Sandusky scandal has always been about the broad strokes though, even though many Penn State supporters have argued through the weeds, parsing this phrase and picking apart that testimony.

For most, this was a terrible story that boiled down to one simple question: Why didn’t officials at Penn State stop Sandusky’s reign of terror when they had the chance?

Namely, in 2001, when Mike McQueary, a then-graduate assistant, reported seeing Sandusky alone with a boy in the showers of an otherwise empty locker room late on a Friday night.

That would be a jarring, alarming, beyond troubling allegation. There would be no reason for him to be there with a child.

Yet this was even worse. It came less than three years after Sandusky had narrowly avoided prosecution from a similar incident.

In 1998, an 11-year-old boy came home after going to the Penn State weight room with Sandusky. His mother noticed his hair was wet and asked why. The boy said he and Sandusky had showered together, an act that included Sandusky lathering him up with soap and bear hugging him from behind as he lifted the boy up closer to the shower head. Mom called the cops.

Sandusky wept to police when questioned. He claimed it was all an innocent act, a misunderstanding, a mistake. He wasn’t charged because the local district attorney, much to the forever frustration of the lead detective, felt it would be a challenging case to gain a conviction. Sandusky escaped.