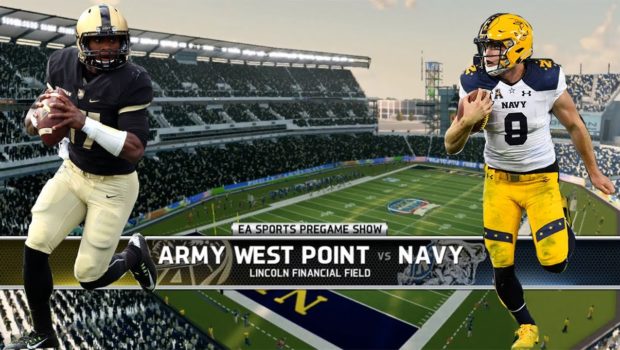 ARMY-NAVY BACK AT THE LINC TOMORROW, JUST AS IT SHOULD BE!

Army finally got a chance to celebrate a victory against their rivals from Annapolis last year, and tomorrow looks to win again for the first time since a five-game winning streak from 1992-96.

Since then, Navy has held the upper hand with 17 wins in the last 20 seasons. As the series shifts back to Philly after a one-year stop in Baltimore, Navy looks to keep their winning streak in the series in Philly going after 10 consecutive Army-Navy Games played in the City of Brotherly Love.

Think college football games can take too long to play? That likely will not be the case with the Army-Navy Game. Forget about teams going up-tempo and getting involved in high-scoring affairs here.

When Army and Navy get together, it is all about those option offenses that keep the clock moving. Army and Navy own the nation’s top two rushing offenses (and Air Force is not far behind at No. 4). Army is the only team in the country with more than 4,000 rushing yards this season (for now), but Navy should join them with 2,822 coming into the game.

Not surprisingly, both academies have the quarterback lead the way with Ahmad Bradshaw of Army rushing for 1,472 yards and 11 touchdowns and Navy’s Zach Abey responsible for 1,322 yards and 14 touchdowns on the ground so far this season.

For the first time since 2012, the winner of the Army-Navy Game will be awarded the Commander-In-Chief’s Trophy, the championship trophy awarded to the winner of the three-way regular season battle between Air Force, Army, and Navy. Air Force won the award last season, and Navy won it the year before. The last time Army took the coveted trophy home to West Point was 1996. It’s been a while, but Army has its best chance in a long time to take the trophy this season.

If you think you need to throw the football in order to win a game, think again. Army has had three games in which it did not record a single completion in the passing game, and the Black Knights are a combined 3-0 in those games. In one of those games, against Air Force, Army did not even attempt a pass. Last year against Navy, Army completed two of four pass attempts for 35 yards. For what it is worth, Navy also is 1-0 in games without a completion this season (43-40 win against SMU).

When it comes to Army and Navy, you know exactly what you are going to get. Hard-nosed running and battles on the line of scrimmage to make sure you don’t let the ball get pitched on the outside. We’re also likely to get a good, one-possession game. Five of the last six meetings have been decided by one score, and each of the last two games have ended in a 21-17 final score with Navy winning in 2015 and Army victorious in ’16. Expect another one-possession game going down to the wire.