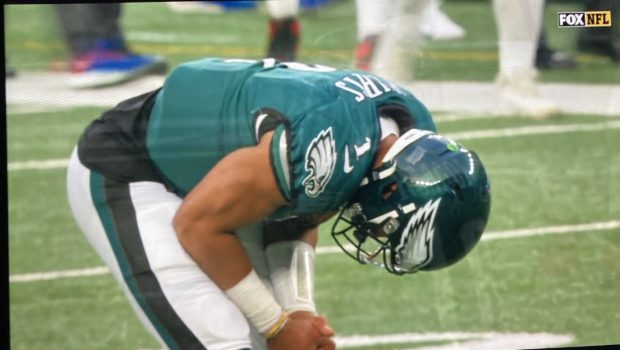 ARE YOU KIDDING? EAGLES HURTS ARM REVERTS TO MEDIOCRITY!

All last week Philly media was all in on Jalen Hurts.

He played well in wins over the Saints and Broncs, he ran like crazy and his flawed passing was under control, under the radar because the Eagles ran the ball on a 2-to-1 ratio.

Then came yesterday’s gut-wrenching loss to the Giants.

On the ground, Hurts nearly willed the Eagles to victory.

Through the air, however, he lacked timing, rhythm, touch — everything — after a promising second series ended with a pick near the red zone.

Jalen Reagor didn’t help matters with a few blatant drops, including one on fourth-and-10 that could’ve won the game.

Neither did Boston Scott coughing up the ball late despite gaining steam as Miles Sanders’ relief.

Defensively, the Eagles never really bowed down to New York despite entering halftime with a 10-0 deficit, keeping pressure on Jones to stay in contention. But their efforts were largely negated by their own offense’s shortcomings.