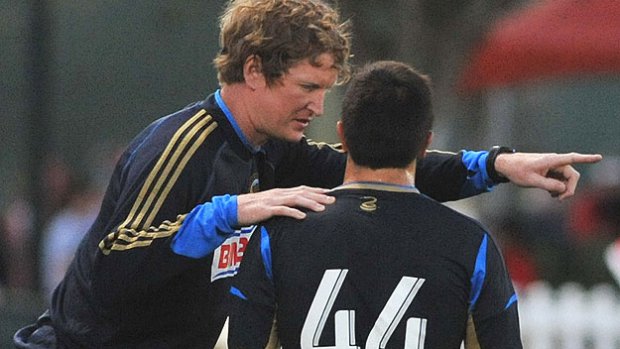 ARE UNION’S PROBLEMS SOLVED BY A NEW MANAGER?

With the Union sitting at a disappointing 3-7-6 heading into the three-week World Cup break, Union CEO Nick Sakiewicz decided he had seen enough.

Manager John Hackworth had to go.

Indeed, Tuesday’s decision to part ways with Hackworth and promote assistant Jim Curtin to the role of interim manager simply came down to “wins and losses” – which, according to Sakiewicz, shows “the ruthlessness of the business.”

Despite overhauling their midfield in the offseason with a trio of big-name acquisitions, the Union have won just once at home this season and currently have the third-worst points-per-game average in MLS.

Sakiewicz said he broke the news to Hackworth on Tuesday but first decided that a change was needed after watching Saturday’s draw with Vancouver a second time – this despite curiously admitting the team has been “scary good” at times and had “dominated our opponents in most of the games we’ve played.”

“Honestly, up to that point, I hadn’t thought about it,” Sakiewicz said. “I was 100 percent in John’s corner, and we were trying to figure out a way together how we are going to get some three-point games under our belt. Saturday night was a big disappointment.

Sakiewicz said Curtin – a Philly native and former MLS All-Star who had been Hackworth’s assistant since the start of the 2013 season – “may very well have the inside pole position to get the job.”

But, he said, the team would look across the globe for a high-profile manager.

Until then, Curtin will be in charge of the club, with Sakiewicz saying the goal will be to chase the US Open Cup title – a “big opportunity” that begins next Tuesday when the Union face the Harrisburg City Islanders at PPL Park – and make a run at the MLS Cup Playoffs.