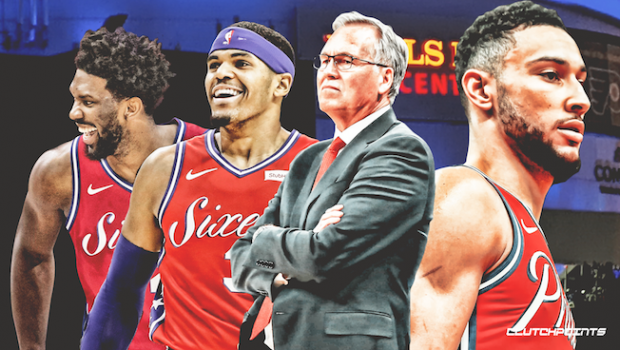 If you believe the conventional wisdom, 69-year-old Mike D’Antoni has emerged as the leader in the Sixers search for a coach to replace the dumped Brett Brown.

GM Elton Brand and the ownership have not uttered a word.

Especially not the Inky’s Keith Pompey, who has no sources and only refers to “league sources” after ESPN’s Woj tweets a bomb.

Chris Sheridan of Basketball News reports that Philly believes that D’Antoni might be the key to taking this team to the next level:

“There have been maturity issues involving Joel Embiid and Ben Simmons that have been problematic for that franchise for several seasons, but league sources said that having a new voice leading the locker room – along with a new offensive game-plan emphasizing speed and scoring that presumably would be welcomed by Simmons, Embiid and Tobias Harris – would be part of the appeal in order for Sixers ownership to go hard after D’Antoni.

There were whispers about the front office potentially looking at breaking up the Joel Embiid and Ben Simmons partnership in Philly this offseason after several seasons of disappointment. They have, however, since denied these rumors, and the report above coincides with the Sixers’ intention to move forward with their two superstars.

The fact that they are looking to bring in a coach that could prove beneficial for both guys points to the fact that they still intend to live out The Process in Philadelphia. Mike D’Antoni has done wonderful things with his previous teams, and it’s exciting to think about the veteran coach bringing his unique style of play to Philly.