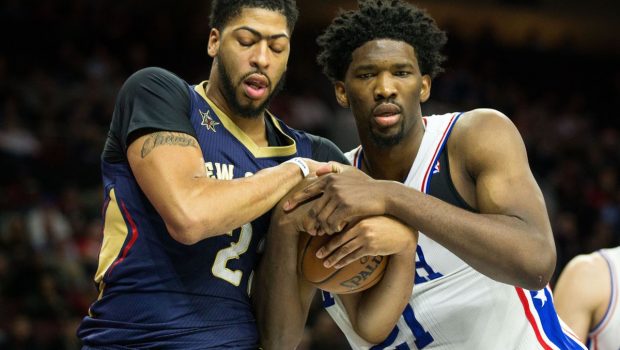 ARE SIXERS IN THE MIX TO TRADE FOR ANTHONY DAVIS? THEY’RE 8-1!

Davis is under contract for two more seasons (with a player option for 2020-21), earning $25.4 million this season. A team acquiring him in a trade would have to meet NBA salary-matching guidelines.

That means that his ultimate landing zone could be clear long before the 2019 postseason gets underway.

Here are the five teams on Davis’ wish list. (Odds on him landing at each come courtesy of BetDSI.com)

_ SIXERS (8-1): A much better bet than the Knicks at these odds, because like the Celtics they have tradeable assets — just not as many. GM Elton Brand is extremely unlikely to move Joel Embiid, and Twin Towers lineups have worked in the NBA before. Davis and Embiid both have strong inside-outside games, which would cause matchup nightmares for opponents who will already have their hands full.

In addition to Miami’s first-round pick in 2021, the Sixers have nine extra second-round picks through 2022. A trade would likely include Jarryd Bayless’ expiring $8.6 million to begin making the money match. Whether or not Markelle Fultz can remember how to shoot will be worth watching. The jury is out on whether he was worth the first pick in 2017.

_ BOSTON CELTICS (Even money): Ainge has more talent on the roster right now than he knows what to do with, and there is a glut of young talent that could be moved. Because of salary cap rules, one big money player would have to be included, and that would likely necessitate putting Marcus Smart’s $11 million (this season) deal into a deal if Al Horford ($29M) and Gordon Hayward ($20M) were not included. Trade candidates would likely include Jaylen Brown and Terry Rozier, and Ainge is sitting on four first-round picks in the 2019 draft: Boston’s own, Sacramento’s (Top 1 protected), Memphis’ (protected 1-8 in ’19; 1-6 in ’20 and unprotected in ’21) and the Clippers (protected Top 14 in ’19 and ’20).

_ LOS ANGELES LAKERS (3/2): About 150 NBA players would like to play alongside LeBron James, so Davis is in good company. The trick in a midseason acquisition would be making the money work to conform with cap rules. Kentavious Caldwell-Pope ($12 million, expiring) would likely be included along with some combination of the Lakers’ young assets, including Brandon Ingram, Kyle Kuzma and Lonzo Ball. Brandon ‘Scoop B’ Robinson, senior writer at Basketball Society & the host of the Scoop B Radio Podcast, has already reported that Kevin Durant is headed to the Los Angeles Lakers.

_ NEW ORLEANS PELICANS (6-1): They lost DeMarcus Cousins and Rajon Rondo in the offseason and got nothing in return, although factors beyond GM Dell Demps’ control were in play. But the bottom line is that they lost two big pieces from last season’s team and are only about six players deep at this point of the preseason, even starting Elfrid Payton alongside Jrue Holiday in the backcourt in their most recent preseason game. Their over/under for regular season wins is 45 1/2, and it can safely be said that they are one injury away from being a bottom feeder in the stacked Western Conference.

_ NEW YORK KNICKS (8-1): They will be tanking this season, but there is hope on the horizon because they will have a lottery pick in next June’s draft along with two max salary spots and a (presumably) healthy Kristaps Porzingis at the start of the 2019-20 season. The fan base has bought into the throwaway season strategy for ’18-’19, but New Yorkers also know that several top-tier players yearn to play at Madison Square Garden to try to bring the franchise its first championship since 1973. No way that Scott Perry could outbid Danny Ainge, so these odds actually might be too short.

Sheridan: Anthony Davis to Lakers a big possibility, but Celtics in the mix, too