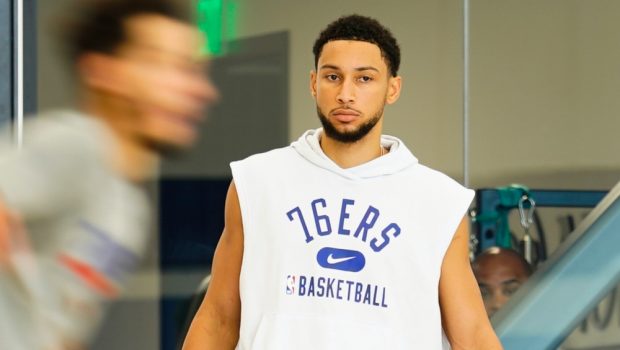 Ben Simmons has become a punchline ever since he melted down like a Rita’s water ice in the heat of last spring’s playoffs.

He spent the offseason going to Wimbledon, buying a mansion in LA and demanding a trade from the Sixers.

Now he claims that he is not mentally prepared to play for the Sixers, who have started 8-4 without him.

Lots of Sixers fans think his only mental health issues relate to his desire to not face the Philly fans, who will undoubtedly roast him every time he touches the ball.

But there is no way of knowing if he really does have issues.

He has met with a Sixers-recommended medical specialist to discuss his mental health, according to ESPN, the first time he’s done so since he informed the team on October 22 that he wasn’t “mentally ready” to suit up and play this year. A week ago at this time, Simmons was meeting with team doctors to treat a back ailment, but he still refused to meet with team psychiatrists.

While this week’s meeting does signal a shift in direction for Simmons, it’s unclear whether he’s had a real change of heart. The front office officially reinstated its fines on him late last week — he lost $360,000 for skipping last Thursday’s game — in frustration that Simmons wouldn’t meet with the team’s mental health professionals. Meanwhile, while Simmons provided the names of the National Basketball Players Association professionals he’s been speaking with since the summer, the 76ers won’t have access to any of their reports, due to patient confidentiality rules.

Sixers president of basketball operations Daryl Morey hasn’t seen a deal he likes, and refuses to bring in a troupe of whatever-role players during the peak of Joel Embiid’s prime. If he can’t get a star, it would seem, he’s willing to work with the beleaguered star he’s already got. He’s willing to fine him, sure, as Simmons skips practices or shows up to them with his phone in his pocket, but he’s also willing to at least humor Simmons’s mental-health woes.

Ultimately, though, it’s no one’s place (and especially not Morey’s) to speculate on the mental health of Simmons from afar. If he decides he’s okay to play, he’ll play. If not, he now has an option that didn’t exist not too long ago — he can step away. The country struggled to processgymnast Simone Biles’s decision to step away from competition during the Olympics. And it’s still unpacking the decision by Atlanta Falcons star wide receiver Calvin Ridley to end his season for personal reasons. But this is where we should be headed in sports, and in society as a whole.