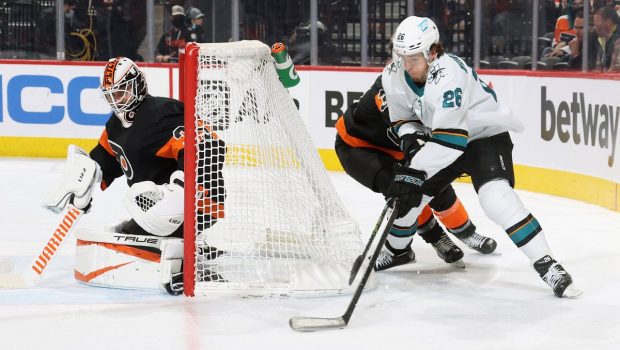 ARE FLYERS REALLY THIS BAD, OR IS COVID MAKING THEM SEEM SO?

And for many of their Nation, it is unfair to judge them harshly because they have so many players in COVID protocols and otherwise injured.

But the question is:

Are the retooled Flyers this bad, which is why they are playing in a COVID fog?

They picked up a point last night because they lost in OT, but they are at 33 points, 17 behind the Rangers and Canes in the Metro.

But if something doesn’t change quickly — and COVID isn’t going away — this is another lost season.

Tomas Hertl completed his hat trick 24 seconds into overtime to lift the San Jose Sharks to a 3-2 victory.

James van Riemsdyk scored both goals for Philadelphia, which has lost five in a row. Martin Jones had 44 saves.

In the extra period, Hertl beat Jones on a 2-on-1 in which he elected to shoot for for his team-leading 20th goal, giving him 18 points (12 goals, six assists) over the last 12 games. He also had the winner in overtime in the Sharks’ 3-2 home victory over Philadelphia on Dec. 30.

The Flyers continued to play without key players due to COVID-19 protocols and injury.

The Flyers started backup goalie Jones against his former team. The Sharks bought out the final three years of Jones’ contract over the summer after three subpar seasons in which he had an .896 save percentage. Jones won 170 games in six seasons in San Jose and in 2016 helped the club reach their only Stanley Cup final.

“I think it’s always special to play against your former team,” Flyers interim coach Mike Yeo said before the game. “He obviously played a lot of really good hockey for that organization. Those things happen in this business, we’re all aware of that. At the same time, there is a sense of pride going up against your former team.”

Jones stopped the first 35 Sharks shots before they scored three in the final 12:37 of regulation and OT.

“It doesn’t feel very good that we lost; that’s it,” he said.

Van Riemsdyk broke the scoreless tie 1:06 into the third. He chipped the puck past Marc-Edouard Vlasic near center ice, raced into the offensive zone and then fired a wrist shot past Hill’s glove side for his eighth of the season.

Philadelphia went up two goals with 13:13 remaining in regulation when van Riemsdyk got credited for his second. Cam York took a shot from the point that deflected off van Riemsdyk high into the air and then off Sharks defenseman Mario Ferraro and over the goal line. York, playing in his sixth career game, earned his first NHL point.

After Jones turned away the first 35 San Jose shots, Hertl got the Sharks on the board a minute later, finishing from close range after a pass from Meier. And Hertl tied it with a backhander from in front of the crease with 5:31 left in the third.

“You see in the third period when the game’s on the line and things are tense, that’s when your habits come out,” Yeo said. “And I thought that’s when a lot of our bad habits came out.”