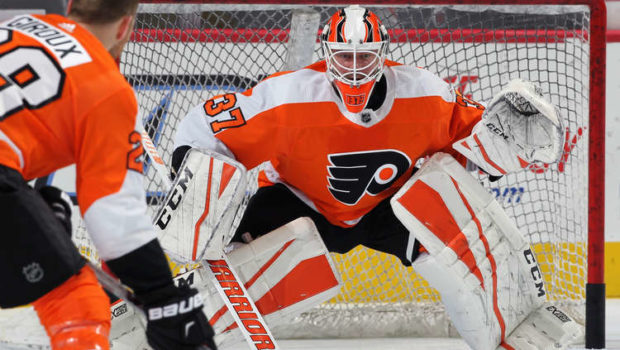 ARE FLYERS ALREADY AT THE CROSSROADS TONIGHT IN COLUMBUS?

Only in the National Hockey League would a team that won in overtime on Tuesday night be looking for redemption on a Thursday night in Columbus.

They are 3-3-0 and blew a three-goal lead on Tuesday but survived for their first home win of the young season with a 6-5 shootout victory over the Florida Panthers.

The Blue Jackets (3-2-0) have not played since they were roughed up at Tampa Bay in an 8-2 loss to the Lightning on Saturday.

The teams’ No. 1 goaltenders didn’t have their best games the last time out.

Brian Elliott (above) was in goal when the Flyers surrendered the big lead against the Panthers, but coach Dave Hakstol remains confident in the team’s Elliott even though he pulled him from that game in the third period with a 5-4 lead.

“We have a plan going forward,” Hakstol said. “Moose is our No. 1 guy, plain and simple. (Tuesday) night’s a tough game for a goaltender to play. Was it his very best, no. When I took him out, he just got scored on on a breakaway that we gave up in a two-goal hockey game. So, there’s a lot of things that went into that.”

Columbus’ Sergei Bobrovsky has been in goal for both of the Blue Jackets’ losses, including the debacle at Tampa Bay. The eight goals were the most he has allowed in his NHL career.

But Bobrovsky has owned his former team, posting a 10-3-1 career record against the Flyers that includes two shutouts, a 1.91 goals-against average and an .933 save percentage.

“He’s unreal. He plays amazing against us every time,” Flyers defenseman Shayne Gostisbehere told the Inky “I think he’s the hardest goalie to score on. He’s athletic. He makes saves and your jaw drops (because) you wouldn’t expect him to make them.”

A big problem for the Blue Jackets in the blowout loss was their special teams. The Lightning converted 4 of 7 power play chances after going 0 of 8 in their first two games.

Meanwhile, the Blue Jackets were unable to capitalize with their own power play (0 of 5). They had a four-minute power play early in the second period and managed only two shots on goal.

Blue Jackets coach John Tortorella is trying to figure out the right combinations on his forward lines and special teams. The top line of Artemi Panarin, Pierre-Luc Dubois and Cam Atkinson is not the problem, having accounted for 14 points and six of the Blue Jackets’ 16 goals in five games.

“It’s a constant monitoring, I guess, of where we’re at,” Tortorella said, according to The Columbus Dispatch. “I know people always go, ‘He’s changing his lines.’ It happens to all coaches. But then, when you’re not changing your lines to try to get some offense, (people say) ‘Why didn’t he change his lines?’ It’s just something I have to watch closely, especially so early in the year.”

In addition to trying to get more contributions from centers Alexander Wennberg, Riley Nash and Lukas Sedlak, Tortorella hopes to give his fourth line of Oliver Bjorkstrand, Sonny Milano and Sedlak more playing time.

“I just simply have to get (them) in more offensive situations without taking it away from other people, too,” Tortorella said. “It’s a hard thing to do because I’m still concerned about just our overall flow of the offensive game. So that’s what I’m juggling.”

The Flyers hit the road looking to play more consistently than they did their last time out. Jakub Voracek and Jordan Weal scored the goals in the shootout that allowed Philadelphia to avoid an embarrassing cave-in loss to Florida.

Weal also had a goal in regulation and an assist as the Flyers bounced back from a 1-0 home loss to Vegas on Saturday.