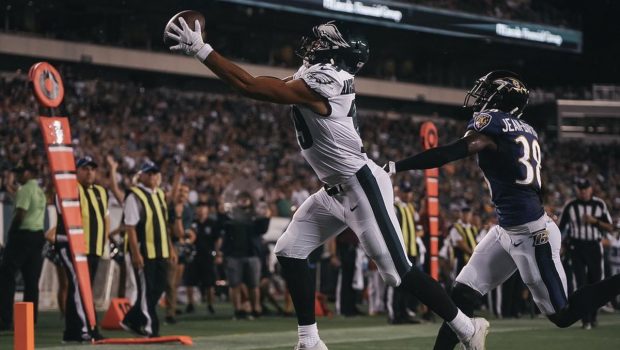 ARE EAGLES REALLY COUNTING ON ARCEGA-WHITESIDE FOR 2020?

The Eagles whiffed on whatever attempts they made to pursue DeAndre Hopkins and free-agent receivers like Emmanuel Sanders and Robby Anderson, among others.

So Eagles big boss Howie Roseman is counting on J.J. Arcega-Whiteside to make a huge leap in becoming a playmaker for quarterback Carson Wentz (via Josh Alper of Pro Football Talk):

The health of Alshon Jeffery and DeSean Jackson is part of that and so was the play of 2019 second-round pick J.J. Arcega-Whiteside in his rookie season. While Roseman may generally have a more positive view, he didn’t sound so different when it came to that last point.

Arcega-Whiteside had 10 catches for 169 yards and a touchdown last year and Roseman said he “needs to take a big jump” during his second season. Nelson Agholor’s departure provides an opening for that leap, although the draft could bring competition that the team finds more appealing once it is time to get on the field.

The former Stanford wideout played in all 16 games last season for the Eagles and made six starts, though he only managed 22 targets on the year.

If there is one positive from Arcega-Whiteside’s rookie campaign with the Eagles, it would be his potential as a deep threat, as Arcega-Whiteside averaged 16.9 yards per reception.

The Eagles will assuredly look to add talent through the NFL Draft, but Roseman has been insistent on improvement from his receivers pending health and opportunity. Arcega-Whiteside was on the field for under 50 percent of all offensive snaps, so perhaps he can become a more established option with more playing time.