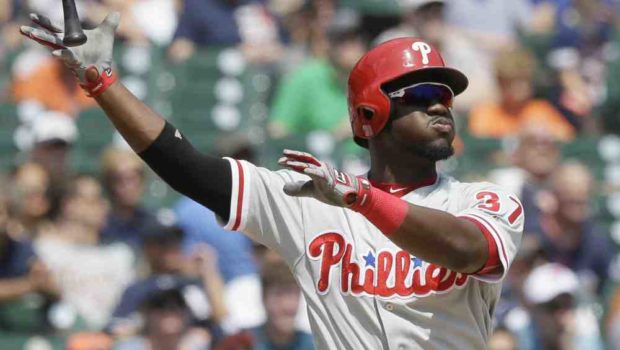 ARE ALL-STAR ODUBEL HERRERA’S DAYS AS A PHILLIE NUMBERED?

Sometimes you have to read between the lines when Phillies manager Pete Mackanin begins riffing on the future.

Such as last night when he praised Aaron Altherr and said he might be the Phils’ center fielder.

Are the Phillies planning to shop All-Star center fielder Odubel Herrera this winter?

CSN’s Jim Salisbury thinks it could make some sense:

The Phillies proved last winter that they aren’t against trading young, controllable players for the right return when they dealt reliever Ken Giles to Houston.

Herrera, 24, might have been the Phillies’ best player in the first half of the season. Indeed, he was the club’s lone All-Star last month. Herrera’s production has slipped since then — he entered Tuesday night hitting just .239 with a .302 on-base percentage since the break — and Mackanin has recently seemed frustrated with the player’s plate discipline, focus and defense.

“He adapted to center field so well last year,” Mackanin said Tuesday. “This year, he’s not quite the same guy.”

Mackanin went on to praise Altherr’s ability to play center field. He added that moving Herrera to a corner outfield spot and playing Altherr in center was a move that could be coming.