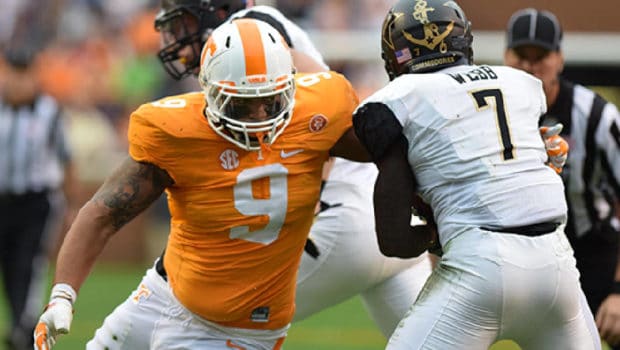 14. Eagles… Derek Barnett, DE, Tennessee… The abundance of running backs available in this draft enables the Eagles to get a pass rusher here, knowing they can add a productive runner later on.

21. Lions… Haason Reddick, LB, Temple… Detroit goes with a very promising defender who could be a consideration for teams picking earlier in the opening round.

1. Browns… Myles Garrett, DE, Texas A&M…Cleveland gets the draft’s potentially most dominant pass rusher. Cleveland’s QB need will have to wait just a little while longer. There is no justification for taking one first. It must be Garrett. He has too much promise to pass up.

2. 49ers… Solomon Thomas, DE, Stanford… If a draft-night trade for Kirk Cousins can’t be pulled off, the QB issue can wait a year. The Niners can make a run at Cousins next offseason or they might be in position to draft USC’s Sam Darnold or UCLA’s Josh Rosen. In the meantime, they get by with Brian Hoyer or Matt Barkley at QB and take the best available player. That’s Thomas.

3. Bears… Marshon Lattimore, CB, Ohio State…Chicago could opt for either of the fantastic safeties here. But the Bears instead go with the draft’s top cornerback.

4. Jaguars… Leonard Fournette, RB, LSU…Jacksonville gets a workhorse runner who can be the centerpiece of the offense, taking some pressure off QB Blake Bortles. That’s something Bortles desperately needs.

5. Browns (projected trade with Titans)… Mitchell Trubisky, QB, North Carolina… The Browns move up from No. 12 and get their guy at QB, then cross their fingers and hope it works out. The Titans move down and amass additional picks, something that has worked well for them.

6. Jets… Deshaun Watson, QB, Clemson… The Jets are in a tough spot. Seeing how things go with their young QBs this season and then addressing the issue, if needed, in next year’s draft might be prudent. But GM Mike Maccagnan and Coach Todd Bowles are too far into their reign to be that patient. They get the draft’s most proven QB.

7. Chargers… Jamal Adams, S, LSU… The first of the two superb safeties comes off the board.

8. Panthers…. Malik Hooker, S, Ohio State… With Fournette not available, Carolina opts to make it two straight safeties. This might be a little early to go with Christian McCaffrey but he’s certainly an option if the Panthers are in RB-only mode here.

9. Bengals… Reuben Foster, LB, Alabama… Hisissues at the NFL scouting combine don’t change the fact that he’s a very good player. He would fit in very well on the Cincinnati defense.

10. Bills… Mike Williams, WR, Clemson… The draft’s top wide receiver just makes the top 10. The Bills stuck with Tyrod Taylor at QB and they give him some help.

11. Saints… Marlon Humphrey, CB, Alabama…New Orleans, as usual, is in the position of having to do something about its defense. The Saints have not been able to acquire Malcolm Butler from the Patriots. So they get a cornerback in the draft instead.

12. Titans (projected trade with Browns)… Corey Davis, WR, Western Michigan… The Titans move down and look at the best available cornerbacks and wide receivers. They address the wideout situation first.

13. Cardinals… Patrick Mahomes, QB, Texas Tech… The end of Carson Palmer’s career hasn’t arrived yet, but it’s in sight. Mahomes lands in a very good situation, playing for Coach Bruce Arians and waiting a little while as Palmer’s understudy.

15. Colts… Jonathan Allen, DE, Alabama… Allen could go earlier. The Colts would be fortunate if he falls to them here.

16. Ravens… O.J. Howard, TE, Alabama… Howard, likewise, has a chance to be taken sooner. The Ravens get a playmaker at tight end if he remains available.

17. Redskins… Christian McCaffrey, RB, Stanford… There certainly are issues on defense for the Redskins. But there also is a need at running back, and McCaffrey’s versatility adds considerably to the offense.

18. Titans… Kevin King, CB, Washington…Tennessee, after getting its wide receiver earlier, goes cornerback this time and completes a productive first round.

20. Broncos… Ryan Ramczyk, T, Wisconsin…Whether it’s Trevor Siemian or Paxton Lynch at QB, the offensive line must be fortified. This would be a good step in that direction.

22. Dolphins… Forrest Lamp, G, Western Kentucky… Miami has devoted plenty of draft resources to improving its offensive line in recent years. Getting Lamp at this point still would be a wise move. He’s a prospective Pro Bowler in the eyes of some draft analysts.

24. Raiders… Garett Bolles, T, Utah… Oakland is another team that has been unafraid to devote considerable resources to its offensive line.

25. Texans… Adoree’ Jackson, CB, USC… A QB such as DeShone Kizer or Nathan Peterson could be in play here after Houston missed out on adding Tony Romo. But the Texans do have some needs on their formidable defense and get a cornerback following the departure of A.J. Bouye in free agency.

26. Seahawks… Taco Charlton, DE, Michigan…He would be a very good value at this point.

27. Chiefs… Jarrad Davis, LB, Florida… A QB or RB would be intriguing. But for now, the Chiefs add to their defense.

29. Packers… T.J. Watt, LB, Wisconsin… Has there ever been a defensive player named Watt from Wisconsin who can’t play? How can the Packers pass him up?

31. Falcons… Takkarist McKinley, DE, UCLA…The defending NFC champs were young and, by season’s end, improving on defense. But the Falcons still could use more help on that side of the ball.

32. Saints… John Ross, WR, Washington… New Orleans gets the speedster to help compensate for the trade of Brandin Cooks to the Patriots.