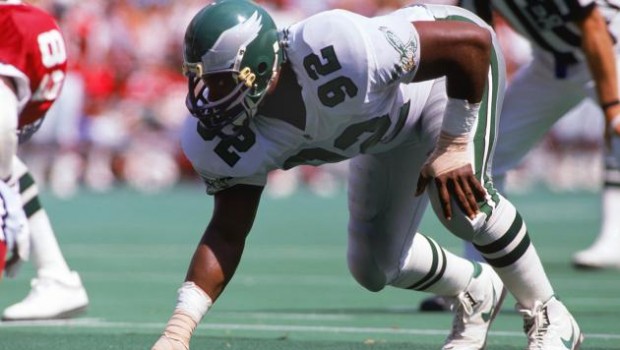 Eagles Hall of Fame defensive end Reggie White died 10 years ago today — Dec. 26, 2004 at the age of 43 — and thanks to Adam Lefkoe of the Bleacher Report here is an interview with Giant QB and CBS football analyst Phil Simms that puts White’s greatness into perspective:

What were your initial impressions of White?

I could just see right away, in the USFL, how unbelievably athletic he was. … I just remember seeing him wreaking havoc in that league.

And yet the Giants passed on him in the 1984 supplemental draft?

To think that he could have been on our team, with Lawrence Taylor, oh my gosh. I know this: I’d have more jewelry on my hands if we had Reggie White.

Any surprise at how good he was, right away?

All those thoughts [were gone] after the first time we played him, and listening to the coaches in their pregame scouting reports and how I heard his name constantly all week long as they were always yelling at the offensive linemen, “If you’re not blocking anybody, go find Reggie White.”

What made it so hard to limit his impact on games?

Buddy Ryan, when he was there as the Eagles’ coach, they were going to do everything they could to make sure Reggie White was only going to have one guy blocking him. So the worst was when Bart Oates, our center, we’d walk up to the line of scrimmage and Reggie White would be head-up on him.

[Laughs] And I knew right away, it is a quick read and a quick throw, because they put a defensive front up there where there was nobody that could double-team Reggie White. … Bart Oates did a pretty good job, but pretty good against Reggie White means he only hits you about six or seven times that game.

What’s your worst memory of playing against him?

In 1988. The first two plays of the game, we go with play-action passes. And, you know, it’s a quick fake, and we’re going to try to throw it down the field, figuring they won’t be ready for this. And he hit me twice. … I yelled at my tackle, “My gosh! The first play?!” And then the next play, the same thing happens again.

I get the ball, drop back, and I can’t even hardly set up. I throw it out of bounds as fast as I can, and I say something to our tackle. I said, “Is this going to go on all day long?” And Reggie White stood over me and talked like Muhammad Ali and went, “That’s right, this is going to go on all day!” And I said something smart to him, and his eyes got real wide—you know, that look he used to have—and man did he beat me. He beat me like no lineman has ever beaten a quarterback over the years.

So what was it like, trying to prepare to play him?

You didn’t worry about going over your game plan. … I truly would sit on my stool in the locker room going, “OK now. Hang in there. Alright. You know, hang in there. It’s going to be rough. Just, you know, come on, hang.” You had to give yourself a pep talk to be tough enough to endure what was going to happen, because it always did happen.

Where does he rank among the players you played against during your career?

He was the greatest, he was the most talented person I ever played against in the league, and you know I’m putting some unbelievable players in that category.

Beyond talent, what made him so tough?

He never took a play off. That’s what made him so hard, so tough. I don’t know if he came out of games.

How did he compare to Lawrence Taylor?

Lawrence played a position where you can help out [blocking him] with a receiver…tight ends, running backs, chip and on and on. Reggie White, they put him in positions where you could do nothing, except the guy who was blocking him. It was just him.

How does that Eagles defense compare to the ones you see in the league now?

I always think back to this: Reggie White, Jerome Brown, Clyde Simmons, [Mike] Pitts, heck Mike Golic was one of the backups in there. It was an unbelievable defensive line. So physical and just so big.

That was the other thing: They were just big men, even for the NFL. And I’m not saying it was intimidating to play them, but you knew what was coming. It was just an incredible physical battle, and I don’t think there’s anything like that nowadays.

What did you think when they added Brown to that defense with the ninth overall pick in the 1987 draft?

I remember seeing [coach Bill Parcells] in our weight room one day, two days before the draft. And Bill Parcells walking in, I said, “Hey Coach, what’s going on with the draft? You know, give me some news, you know, during the offseason.”

He goes, “Simms, our life could be—it’s about to change.” I go, “What do you mean? What’s going on?” “Well, Detroit’s probably going to draft so and so, and these Philadelphia Eagles, I think they’re going to take Jerome Brown, and I’m telling you Simms, it’s going to be rough.”

And I went, “Really? Is he that good?” And he goes, “I’m not saying he’s Reggie White, but if he’s not, he’s his twin brother.” And I went, “Oh my gosh.” … I could tell by Bill’s attitude, he was actually depressed about it because those two, along with Buddy Ryan and how they played and everything else, it made our life very difficult.

And Bill didn’t exaggerate that day. He was right.

What were the two of them like, on the field together?

Just relentless, rough, tough and, you know, they played—and again, it was no trash-talking or nothing like that—they just did it.

Describe a hit by Reggie White.

Just before I hit the ground, he’d raise his arms and legs just to make sure all of his body—you’d get the full impact.

How much does the NFL miss Reggie White?

All these things we see now. I actually think about it from time to time. Can you imagine? He would be right in the middle of this, and being a voice of reason to maybe bring both sides together even quicker and better than it’s happened in the NFL. So there’s no doubt.

I don’t know if he’d be head of the players union, or the commissioner. I don’t know what, but I know this: His voice would be huge in the game of football. And everything he would have done would have been for the betterment of the athletes and the game.

All these things I’ve said about him on the field, he was going to have maybe even a greater impact off the field, with the game and of course with other things in life. And that’s what we miss.