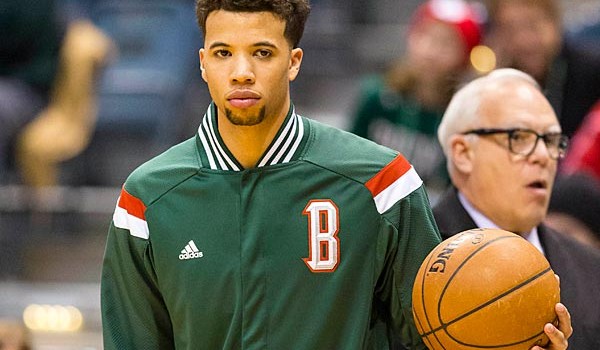 Michael Carter-Williams may or may not play against the Sixers tonight.

And by the reaction of some in the media — Glen Macnow and Marcus Hayes in particular — you might have thought they were getting rid of the great Mo Cheeks, who was a real point guard.

MCW is a dreadful shooter and a sub-standard distributor of the ball — two qualities that NBA point guards must have. And there was another reason:

An ailing foot has kept him from making his debut with the Bucks, the Sixers’ opponent tonight in Milwaukee.

Carter-Williams was sent to Milwaukee in a three-team deal completed minutes before last Thursday’s trade deadline. The Bucks sent Brandon Knight and Kendall Marshall to Phoenix in exchange for Miles Plumlee and Tyler Ennis.

Carter-Williams averaged 16.0 points, 6.7 assists and 6.2 rebounds in his 111 games with Philadelphia and had three of his five career triple-doubles this season.

“I had no idea I was going to be traded. The trade deadline was at 3 p.m. and I got the call at about 2:59, so I was shocked,” Carter-Williams told the Bucks’ official website. “I was a little disappointed at first, but once everything sunk in, I met the guys here and talked with coach (Jason) Kidd, I was really excited to be here.

“I hold no remorse toward Philly. I believe I’m in a better place. I can’t wait to get out there and have fun.”

Carter-Williams has been on the sidelines for his first three games with Milwaukee and missed six straight contests overall because of a right foot strain. He’s listed as probable for tonight.

The Bucks (31-25) could use him following their lowest-scoring performance of the season.

Milwaukee was also held to a season-low 33.7 percent shooting, including a 4-for-18 effort from 3-point range, in Monday’s 87-71 loss to Central Division rival Chicago.

“We’re waiting to get Michael Carter-Williams healthy and on the floor, but it is going to take us some time to get the offense clicking,” Kidd said. “We had some good looks that just didn’t go down for us.”

The Bucks have dropped back-to-back games after winning nine of 10 and had a seven-game home streak snapped – their longest in five seasons – with a 97-86 defeat to Atlanta on Sunday.

They would appear to have a promising chance to get back in the win column against the lowly 76ers (12-44), who have been depleted by deadline deals that netted mostly draft picks.

Philly is also without leading scorer Tony Wroten (knee) and has seen its season-worst road losing streak grow to 10, three shy of matching its longest from 2013-14. A 119-108 loss in Miami on Monday was also the 76ers’ fourth in a row overall.

With Carter-Williams traded and Wroten out, Robert Covington (13.2 ppg) is the team’s top scorer and he had 16 points, five steals and zero turnovers against the Heat. Reserve Hollis Thompson scored 22 points, one shy of matching his career high.

Milwaukee has won the past four against the 76ers by an average of 15.5 points and had one of its best shooting performances of the season (53.9 percent) in a 97-77 road victory Jan. 7. The Bucks have also taken four straight home games in the series, the latest a 93-81 final Oct. 31.