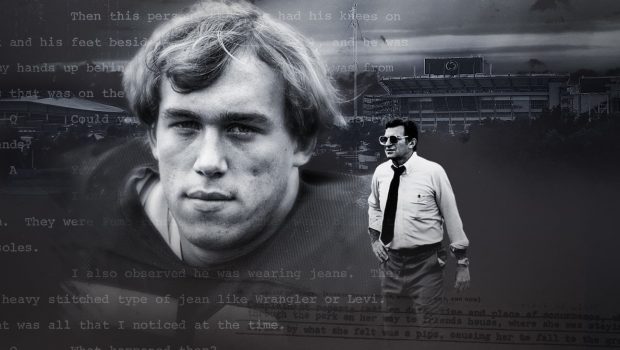 Penn State was rocked in 2011 by the revelations of the Jerry Sandusky sex abuse scandal and what it meant for coach Joe Paterno’s reputation, since he pretty much was aware that Sandusky was a predator.

The story recounts how Hodne broke into women’s apartments in State College and raped them at knifepoint.

Hodne arrived at Penn State in 1977 and his documented crimes began in 1978.

Along with one other Nittany Lion teammate plus one of his friends from growing up, Hodne was convicted of burglarizing a record store, in which the trio stole about $800 worth of merchandise.

Paterno suspended Hodne for the entire season, telling reporters at the time that the linebacker would be able to eventually return to the team “if he has a good academic year and if he proves to us that [the robbery] was a mistake.”

Paterno arranged for Hodne to room with Fred Ragucci, a senior, presumably in the hopes that conscientious behavior would rub off on the troubled linebacker.

“He was always playing with it when he was in the room,” Ragucci said about a knife. “It had a leather sheath, and he would take the sheath on and off, on and off. All the time, even when you were having a conversation.”

Several months after the burglary, a then-21-year-old Penn State student named Betsy Sailor was interviewing prospective roommates. One man had called, purportedly on behalf of his girlfriend.

Later, while about to study for a test, she flipped on the light switch in her bedroom, and the light did not turn on.

“The next thing you know,” Sailor said, “I had a hand around my mouth and a knife at my neck, and a voice said, ‘I’ll kill you if you say a word.’”

The police report described the rest of the incident as follows: “Actor returned and he took off all his clothes and sat on her chest and put his penis to her mouth and told her to suck it, she said she couldn’t do that, he became angry so she opened her mouth and he put it in. He then moved to her crotch and began licking. He said ‘say you like it,’ she said, ‘no, because I don’t.’ Actor then began to rape complainant and she said, ‘Please don’t cum inside because I’m not using birth control and don’t want to become pregnate [sic] over something like this.’ He said OK but complainant does not know if he did or not. Actor then put his clothes on and went out of the room.

“… she heard him open the back door (outside exit) and then he came back in. Actor told her to open her legs. She refused saying, ‘What are you going to do? Don’t put anything inside me.’” Actor then began moving around the room opening dresser drawers. She asked him what he was doing and he said, ‘Waiting for a ride.’”

State College police sent fingerprints from the scene to the FBI, who traced the prints to Hodne, which were on file from the record store robbery.

A police report said that local officers asked Paterno about where to find Hodne, and that Paterno suggested reaching him through his roommate, Ragucci.

Another former Penn State student, Karen, who also chose not to provide her last name, had reported to police a sexual assault similar to the other accusers’. She recalls being told by investigators that there was not enough evidence to prosecute.

Karen told ESPN that Joe Paterno was “involved” with the case.

“But the impression I got was he knew it was that guy [Hodne] but he wanted to probe and see if I knew that it was him. I think that was kind of the gist of it. Which at the time I was really — I don’t remember what I said. I don’t remember too much about what I revealed or didn’t reveal. I don’t think I revealed much of anything.”

Karen later recalled that Paterno’s phone call “was kind of an admission that his football player did it, and he was expecting me to move forward.”

Karen felt that Paterno was calling out of concern for the Penn State football program — not her.

Nonetheless, when Hodne was charged with raping Betsy Sailor, one of Hodne’s former teammates, Tony Capozzoli, recalled that Paterno told him not to testify on Hodne’s behalf — and implies he was kicked off the team for disobeying.

“So right off the bat, [Paterno] says, ‘Todd Hodne is guilty, and if you testify for him, you’re off the team,’” Capozzoli said. “So I said, ‘Look, Joe’ — I laughed at him. I said, ‘The guy’s got a million girlfriends. Maybe he dumped her and she got mad.’ I said, ‘I’m just going to tell the truth.’ I never took what he said to heart. I testified and went home for a few days, and when I get back, my room key doesn’t work.

“All my s— is gone; somebody moved it. I’ve been moved down to this place we called the barracks, in the basement of the gym. He goes, ‘You still have your scholarship; you can go to school. But you’re off the team.’ Isn’t that, like, jury tampering? Isn’t that a criminal act? But there’s no recourse. What are you gonna do?”

Hodne, who was represented by a lawyer reputed to be a “fixer” for the Penn State football program, was found guilty of raping Betsy Sailor. There was scant local press of the incident, and in the Centre Daily Times the story about it did not mention him directly as a football player, but said at the bottom that he had been suspended from the football team over the record store incident.

Remarkably, Hodne’s bail was not rescinded after his guilty conviction. He then raped several more women around Long Island before ultimately getting busted again.

And yet, he was not finished.

In 1979, Hodne was sentenced to 7-21 years in jail after pleading guilty to two counts of rape, two counts of sexual assault, and a single count of attempted second-degree robbery. He was paroled at the short end of that range, despite strident protestation from Suffolk County prosecutor John Collins, whose preservation of files from Hodne’s extensive rap sheet provided much of the material that ESPN had to work with.

After parole, Hodne attempted to rob a cab driver named Jeffrey Hirsch, who was a father of four. Hirsch resisted, and Hodne wound up killing him in the struggle.

Hodne died of cancer in 2020 at age 60 in New York state prison after being arrested and convicted for Hirsch’s murder.