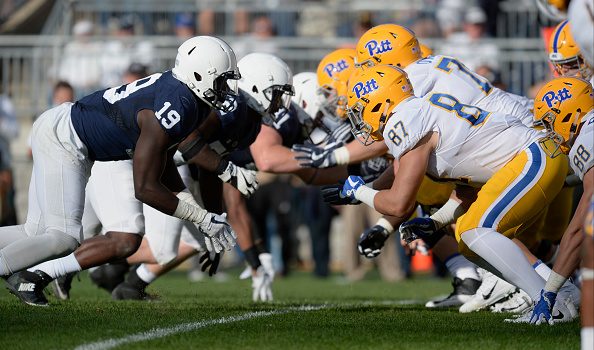 They are facing another life-or-death game the day after tomorrow night:

Weather: Chances of showers throughout the evening with temperatures cooling into the 60s.

This will be a crucial week for Penn State’s defense, as it sets the tone for the season and searches for an identity after an uneven performance against Appalachian State. After exceeding expectations in the first three quarters, the Nittany Lions defense suffered a late collapse that almost led to a disastrous upset by allowing 28 points in the fourth quarter.

Penn State will be looking to stop a different Pitt quarterback this year in Kenny Pickett, who made a name for himself by guiding a stunning upset against previously undefeated Miami in the final regular season game of 2017. While not the most physically-gifted quarterback, it’s obvious that Pickett has an outstanding feel for the game. He’s incredibly efficient, making smart decisions and often scrambles to pick up key first downs. In week one, he completed 72.1 percent of his passes against Albany for 154 yards, two touchdowns and an interception. He also picked up 42 yards and a touchdown on the ground.

Among Pickett’s primary targets will be Rafael Araujo-Lopes, a small but speedy playmaker. Pitt tries to get creative in getting the ball in Araujo-Lopes’ hands, and it won’t take long to see why. The senior scored twice on his three receptions in week one. He’ll be a challenge for Penn State’s secondary, which is looking to bounce back following an overall poor performance in week one.

If the sole overtime session against Appalachian State showed anything, it’s that Miles Sanders is ready to emerge as a star for the Penn State offense. Sanders carried the rock on all four OT plays, ending with the eventual game-winning touchdown. The latest SI cover person ran tough, broke tackles, juked out and ran past defenders- basically everything to prove he’s an elite running back ready to carry the load. Mark Allen and Ricky Slade also saw significant time in the backfield, but expect Sanders to be the main ballcarrier moving forward.

Trace McSorley will likely look to get his two most experienced receivers back on track after subpar performances in week one. While Johnson had six receptions for 67 yards, he also dropped three passes. Surprisingly, Thompkins was played no part in the passing game- something that should change on Saturday. KJ Hamler proved to be a future star, and should play a bigger part of the gameplan after a monster fourth quarter that sparked Penn State’s late comeback. Jonathan Holland and Danny Dalton combined for three receptions for 38 yards as Penn State looks to replaceMike Gesicki’s productivity at the tight end position.

Penn State’s offensive line did not prove to be a strength as many had anticipated, so it will be interesting to see if the coaching staff makes any tweaks to the lineup or if they allow more time for the unit to jell. Pay special attention to the interior line, whereConnor McGovern and Michal Menet are still adjusting to new positions.

Pitt returns plenty of experience from a defense that finished right in the middle of the pack (65th) in scoring defense. They are led by standout fifth-year senior Oluwaseun Idowu- a linebacker/safety hybrid who can make plays all over the field. He is coming off an outstanding junior campaign where he accumulated 94 tackles, 11.5 TFLs and five sacks. Sophomore defensive tackle Keyshon Camp will be a challenge for the interior line, and is coming off a two-sack performance in week one. Fifth-year seniorDewayne Hendrix also knows how to get to the quarterback and should cause some disruption on Saturday.