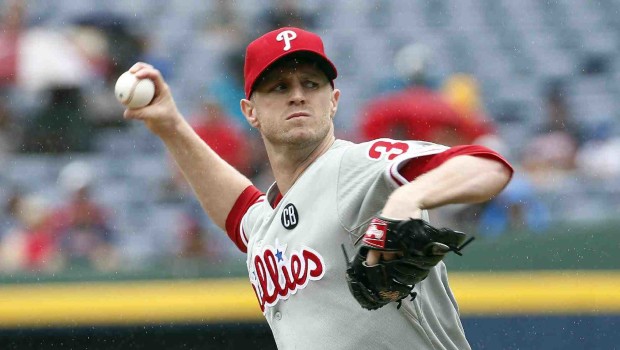 The Braves have won of five of seven to remain tied for first with Washington in the NL East.

Wood (7-7) allowed three hits and one run with eight strikeouts in six innings to win for the first time four starts.

The first five innings were played in a steady drizzle before heavy rain caused a 1 hour, 39-minute delay in the middle of the sixth.

Philly took a 1-0 lead in the second when John Mayberry Jr. homered, but the Braves went up 2-1 in the bottom half of the inning on Johnson’s seventh homer.

After Johnson lined out, the Braves went up 6-1 on La Stella’s three-run double. The rookie improved to 6 for 7 with 13 RBIs with the bases loaded.

Kendrick gave up five hits, six runs, two walks and struck out one in five innings. Over his last six starts, Kendrick is 1-4 with a 6.99 ERA.

Wood, who returned to Atlanta’s rotation on June 25 after pitching nearly seven weeks in relief, improved to 4-6 with a 2.95 ERA in 12 starts this year.

The Phillies have lost four of five to drop 11 games back in the NL East. Dropping to 9-42 when scoring three runs or less, Philadelphia missed a chance to score with the bases loaded in the eighth when Jimmy Rollins grounded into a double play and Chase Utley popped up.

Marlon Byrd hit his 19th homer to cut the lead to 8-2 in the ninth off David Carpenter.