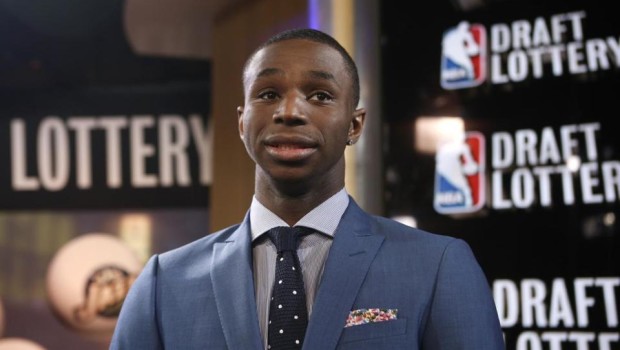 Everyone agrees that if the Kansas star is selected by the Sixers in next week’s draft, he will light up the Philly sky in the fall

It should be obvious to anyone who has been any attention that the Sixers are in love with Andrew Wiggins — so much so that they seem willing to trade the No. 3 pick in the June 26 draft to Cleveland in order to ensure that Wiggins is a Sixer in the fall.

So, what will Philly be getting? And will he make the team’s fans forget the horrible 19-63 season?

Wiggins comes from good stock, the son of former NBA player Mitchell Wiggins and former Olympic track and field sprinter Marita Payne-Wiggins. Their athletic DNA is apparent to anyone who watches Wiggins play.

Said one Eastern Conference scout: “He doesn’t run. He gallops. He glides. He flies.”

Said one Western Conference scout: “As a basketball athlete, he is on a LeBron James/Russell Westbrook level.”

Said an Eastern Conference executive: “He runs and jumps as well as any of the athletes that we have in our league now.”

Known by some as the “Michael Jordan of Canada,” the 6-foot-8-inch swingman entered Kansas as the nation’s top recruit and, after his freshman season, is the likely No. 1 overall pick in the June 26 draft.

Wiggins likely won’t fall past the third overall pick, and many scouts and executives believe he could end up being the best player in this draft.

“[Kansas center Joel] Embiid has a chance to take his game a long way, [Duke forward Jabari] Parker is, I think, closer to what he’s going to be, but Wiggins is a little bit unknown — how good can he be?“ asked one Western Conference executive. “The sky is the limit. He could be the best of all of them. That wouldn’t surprise me at all.”

An Eastern Conference scout added that “Wiggins has the greatest upside of anybody in the draft.”

Wiggins is described as a versatile defender who can guard multiple positions, is a good free throw shooter, and an improving 3-point shooter with an offensive game that’s still developing.

But the questions of passiveness linger because even though Wiggins is a world-class athlete, with a reported 44-inch vertical leap to go with a 7-foot wingspan, he at times has lacked the so-called “killer instinct” that NBA types want.

“If you saw him play, there were certainly times when he disappeared on the floor,” said a Western Conference scout.

At Kansas, Wiggins set the school’s freshman scoring record with 597 points, averaging 17.1 per game. He was more productive toward the end of the season, when Embiid, the team’s other freshman star, was sidelined with a back injury.

Wiggins then scored a Kansas freshman-record 41 points at West Virginia, becoming the only Division 1 player to have at least 5 steals and 4 blocks in a 40-point game in the last 15 seasons. He also scored 30 points against Oklahoma State, dominating Cowboys guard Marcus Smart, a likely lottery pick, in the process.

But Wiggins always seemed capable of more, which left everyone wanting more. “He’s always deferred. He’s a consummate teammate,” said another Eastern Conference scout. “He’s never, ever wanted to step on guys’ toes and I think that has to change for him to be great, great.”

Given the volume of games Wiggins will play in the NBA, his willingness to defer is a concern, said one Eastern Conference executive.

“That’s one thing that will scare me a bit, just because you have 82 games in this league and he’s going to go to a team that’s not going to win right away, and it’s the middle of February and he’s out in Minnesota or Milwaukee and you’ve got a game and it’s like, will he get up for those?” the executive asked.

Dealing with such questions isn’t new for Wiggins. They’ve followed him for years. Perhaps most notably, a Sports Illustrated article in 2013 pointed out red flags, such as his questionable work ethic and motor. It also noted that his recruitment had been run by his father, “an unemployed former NBA guard best remembered for a two-year suspension for testing positive for cocaine,” the article stated.

On the same day the article was posted online, Wiggins, then playing for Huntington Prep in West Virginia, scored a career-high 57 points to go along with 13 rebounds and 4 blocked shots in a 111-59 win.

“After that article dropped, I knew I had to respond,” Wiggins said after that game. “That was the best way to respond.”