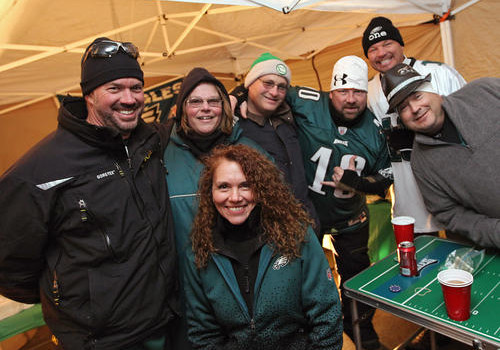 Nineteen sixty is as important a date in Philly sports history as it was in political history with the presidential election of John F. Kennedy, whose 1,000 days in office would always have an association with “Camelot.”

That year truly marked the beginning of the Eagles’ primacy and the Phillies’ descent into ineptitude. They would solemnize their place the next year, when they lost 23 games in a row.

And 1960 was also the year that the NFL installed a 33-year-old Pete Rozelle as commissioner. The most important accomplishment of his reign was the expansion of national television with rights fees shared equally by each team.

Baseball might have been America’s Pastime but pro football became America’s Obsession.

As any long-suffering obsessed Birds fan will tell you, 1960 was the last time the NFL title flag flew atop this town — 54 years years without a title is now the cross Jeffrey Lurie must bear as he and Chip Kelly shoot for the Super Bowl this year.

The Phillies went from 1883 until 1980 before they won a World Series, and they won again in 2008, but for baseball fans that period from 2007-to-11 was a true Camelot. It was always sunny in Philadelphia when the Phils dominated the NL East and for most of that period the National League.

They were truly the talk of the town, supplanting the Eagles who were languishing in the final throes of Andy Reid’s otherwise stellar stewardship.

And now the Eagles are back, thanks in no small part to how awful the Phillies have played the last two years, with little hope to turn it around until the team is sold and/or the general manager is replaced. And also to the energy and excitement caused by the 2014 Eagles.

Cheering for the Eagles during a Phillies’ game is the ultimate sign of apathy, a flashback to the way it used to be around here before the baseball team won over the city.

Less than three years removed from a dominant run that featured five straight NL East titles, two pennants and one World Series championship, the Phillies barely resemble the team that captured the hearts of a sports-crazed town.

Attendance is down, of course. After seven straight seasons of drawing at least three million fans, the Phillies are on pace for a half-million drop this year. They had a consecutive sellout streak of 257 games — the third-longest in MLB history — between July 7, 2009 and Aug. 6, 2012. Now, empty, blue seats fill the stands.

Several of the star players who led the most successful period in franchise history are still here — Ryan Howard, Chase Utley, Jimmy Rollins, Cole Hamels, Carlos Ruiz. They’re getting paid for past performances and each — except Hamels — is well past his prime. That’s part of the reason why the Phillies are in this mess.

Thanks to the big contracts general manager Ruben Amaro Jr. gave the stars of ’08 and money spent on Cliff Lee, Jonathan Papelbon, A.J. Burnett and Marlon Byrd, they have the highest payroll ($184 million) in club history and third-highest in the majors.

All that produced a 42-53 record before the All-Star break, putting the Phillies 10 games behind Washington and Atlanta. With the non-waiver trade deadline approaching on July 31, major changes are expected. The Phillies twice flirted with inching their way into the playoff race by winning five straight games only to fall further back in the standings.

“Regardless of how we play, they’re still going to make their decisions for the future of the team,” Rollins told the Associated Press last week. “I remember back in ’05, ’06 we started making trades and we started winning. It’s like, you take this guy out and you say we’re not going to compete this year but we have the last say in that, and hopefully that is something that’s going to happen this year.”

Rollins and teammates are clinging to hope they can turn things around. They’re ballplayers so they have to think like that. Reality says it’s time for the Phillies to rebuild.

Declining veterans are only part of the problem. Young players haven’t stepped up and a dearth of talent in the minors leaves little hope for a quick turnaround.

Domonic Brown was a heralded prospect who finally lived up to expectations last year when he was an All-Star in his first full season as a starter. But he’s batting just .227 with six homers and 46 RBIs this year and running out of chances.

Ben Revere doesn’t appear to be the answer to center fielder of the future. He’s hitting .295, but has a .316 on-base percentage and .670 OPS and is poor defensively.

Third baseman/first baseman Maikel Franco is the organization’s best position player. However, he’s only hitting .228 in his first season at Triple-A Lehigh Valley. Two other top prospects — shortstop J.P. Crawford and center fielder Roman Quinn — are only in Single-A Clearwater.

When the Phillies beat Tampa Bay in the 2008 World Series, five regulars and the two top starting pitchers were homegrown talent. Four of them — Utley, Hamels, Pat Burrell and Brett Myers — were first-round picks.

Since Hamels was selected 17th in 2002, only two of Philadelphia’s first-round choices even appeared in a game for the Phillies and both are long gone. Only six of the 13 picks remain in the organization. Lefty Jesse Biddle, the most-prized of the bunch, has had a disappointing season in Double-A and was recently shut down to get a mental break.

Though signs point toward a massive overhaul, Amaro is hoping for a quicker fix.

“I can’t blow this team up for five years and expect us to be (bad) for the next five or six years,” Amaro said recently. “I don’t think that’s the right way to go about it for our fans, our franchise, our organization. I think we owe it to a lot of people, if we do have to go into a transition, it’s going to be a shorter one than that.”

“There’s ways to do it. You have to make shrewd moves, make intelligent moves and try to continue to do that so that the drop-off isn’t long term. So if we have to go a step backward for a year or two to move forward, then that’s what we’ll try to do.”

At least fans can look forward to training camp and their beloved Eagles.