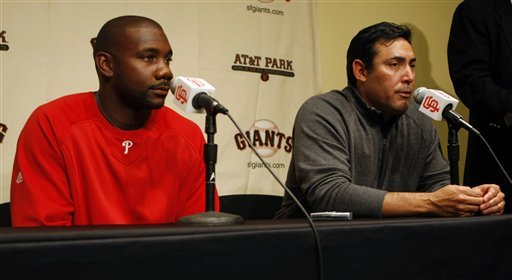 AN OVERPAID WHINER AND THE DICK CHENEY OF PHILLY SPORTS

I don’t know what amazes and pisses me off more — Ruben Amaro Jr. asking the Yankees for their top hitting prospect, 22-year-old Aaron Judge, in exchange for the Phils’ 37-year-old Marlon Byrd; or Ryan Howard’s recent comments about how hard his life is and asking if we “want to trade places. Want to see what’s it’s like?”

The answer to Howard is absolutely. Where do we sign up for a part-time job playing a kid’s game that pays us $25 million a year, well-deserved boos and all.

Yankees GM Brian Cashman considered Amaro’s offer for a nanosecond and said, “Thanks, but no.”

Amaro is quickly becoming the Dick Cheney of Philly sports — they have both overseen disastrous policies, Cheney the Iraq war and Amaro the steady and continuing slide of the Phillies from one of the best teams in MLB to one of the worst.

Why do we even care what these losers think anymore?

In Cheney’s case he is just another TV talking head with an opinion. He has no job and cannot cause any more damage to our nation and its psyche. So when he doubles down and says he was right about invading Iraq it is regarded as a curiosity.

However, Amaro, for reasons passing understanding, is still employed as Phillies GM. And he followed up with a prediction that the Phils wouldn’t contend in 2015 or 2016! Which tells me that he knows how inept he really is.

A general manager must have two major talents — talent evaluation and knowing the money and running the business. Amaro has demonstrated no ability in either.

When he signed Byrd last winter, he could have snared Nelson Diaz, a real power bat. And he talked Byrd up as the second coming of Joe DiMaggio. Maybe owner David Montgomery will sit up and take notice now of Amaro’s ineptitude.

Howard is a different story altogether. It has been written by lots of people who should know that he hasn’t been the same since he tore his Achilles tendon while striking running out a grounder to end the 2011 Phils’ season in the NLDS against the Cards.

Howard is making $25 million a year, which makes him easily the most overpaid player in the city’s rich sports history. Unfortunately, he is so out to lunch that he has taken to victimization and whining, even after stroking a HR and a game-winning hit last night.

In the post-game presser last night, he admonished the media that, “You have forgotten what I can do.”

We haven’t forgotten. We just would like to a lot more of it. In either event, we would like you to shut the hell up.