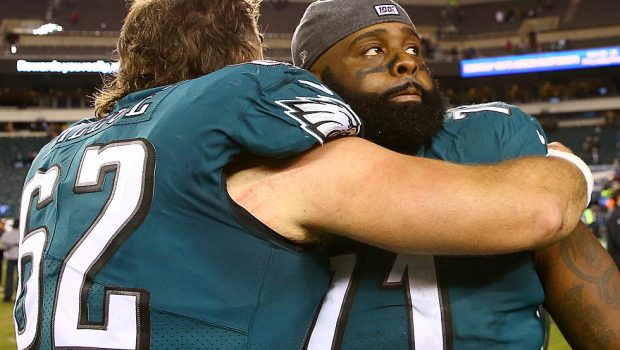 AN EAGLES-JASON PETERS REUNION ‘ONLY A MATTER OF TIME’!

The Eagles let Jason Peters test the free agent market, but a month and a half later, the great left tackle may be coming back home.

NBCSP’s Derrick Gunn thinks a reunion is in the cards:

“I do know for a fact that Jason Peters wants to be in Philadelphia, the Eagles want Jason Peters here,” Gunn reported. “It’s only a matter of time before they get something done.”

The Eagles’ initial plan when they traded up a few spots for Andre Dillard in the 2019 draft was to let Peters play one more season and then have Dillard take over in 2020. And it seemed like the Eagles were going forward with that plan until now.

It has been clear that opinions on Dillard inside the NovaCare Complex have been mixed and there are many people who still want Peters back.

Peters turned 38 in January but still played at a relatively high level in 2019. He missed three games but has actually started 32 of 35 possible games, including playoffs, over the last two years.

Last season, Peters played on a one-year renegotiated contract that paid him $6 million. Before paying draft picks, the Eagles have around $27 million in cap space for 2020.

Dillard, 24, struggled in the one game he played right tackle but was OK in the three games he started in place of Peters at left tackle in the middle of the season. If he sits behind Peters for another season, that’s two of five years under team control without Dillard being a starter.

“Now, the plan was for Dillard to hopefully be their starting left tackle but he did not progress as quickly as the Eagles had hoped he would,” Gunn said. “So you get Peters back here for at least one more year, Dillard is his understudy for one more year, learning under a future Hall of Famer. But by 2021, Andre Dillard had better be ready to protect Carson Wentz’s blindside.”