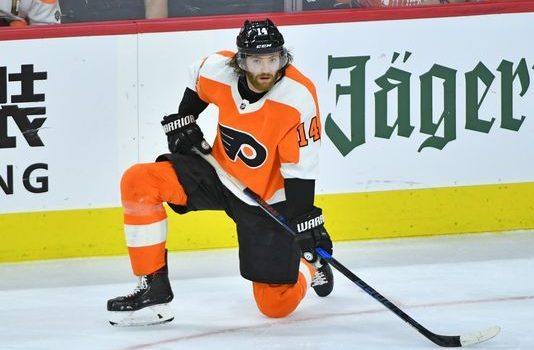 The legend of Flyers center Sean Couturier is now comparable to Roy Hobbs in “The Natural”:

He scored three goals and assisting on two others yesterday– while playing on a torn MCL as the Flyers were liminated from the Stanley Cup playoffs with an 8-5 to the Pittsburgh Penguins.

Couturier injured his right knee in a practice collision with teammate Radko Gudas last Tuesday and missed Game 4 of the series.

But with his team down 3-1 in the series, he returned and scored the game winner in Game 5 on Friday, before his encore performance in Game 6 yesterday was overshadowed by a four-goal outburst from Pittsburgh’s Jake Guentzel.

The Flyers had not divulged the nature of Couturier’s injury, but he told reporters after yesterday’s elimination that he had torn his MCL, and that while it would not require surgery, it likely would have meant a four-week absence had it been the regular season.

“It’s tough, because we lost, obviously,” Couturier said. “I just tried to lay it all out there, and give it all I had. It’s too bad we didn’t come with the result we wanted.”

Couturier opened the scoring in Game 6 with a goal just 2:15 into the first period, then scored early again — at the 0:40 mark of the second period — to push the Flyers back into the lead at 3-2. But by the time he completed his hat trick late in the third period, Guentzel and the Penguins had the game all but tucked away.

Couturier finished the postseason with 9 points (5 goals, 4 assists) in the five games he played. He had 31 goals and 76 points while playing all 82 regular-season games.