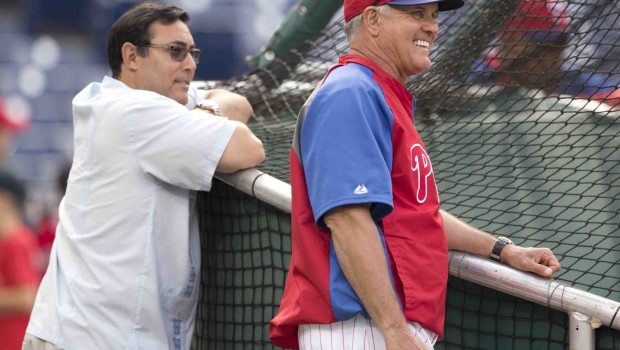 AMARO THE RUBE IS THE REASON THE PHILS CAN'T TRADE PAPELBON

Papelbon cleared waivers, so he is available to any club. And while his contract includes a $13 million salary next season and $13 million vesting option for 2016, Amaro said that he has made it clear to other GMs that he is willing to include cash in any trade, “including possible vests.”

Amaro has totally botched whatever chance he had of ditching Papelbon with his dumb public statements a few months ago that the Phils still had a chance to make the playoffs when even Stevie Wonder could see that they were toast.

Memo to Ruben: When every other GM in baseball hears your boneheaded remarks they know you are not just a Rube because of your name and they will hold out for a bargain basement deal on any Phil, especially the loud-mouthed trouble-making Papelbon.

As Rosenthal points out, Papelbon no longer throws as hard as he once did — his average fastball velocity has dropped over the past four seasons from 94.8 mph to 93.8 to 92.0 to 91.3. His strikeout rate is the second-lowest of his career, and his .232 opponents’ batting average on balls in play indicates that he has benefited, in part, from good luck.

Still, it’s difficult to argue with Papelbon’s results – he’s 31-for-34 in save opportunities, his 0.85 walks and hits per innings pitched (WHIP) is his lowest since 2007 and he’s still averaging nearly a strikeout per inning.

So, is it his personality?

Amaro said it shouldn’t be, explaining that Papelbon has been a positive influence this season on the Phillies’ younger relievers, most notably Jake Diekman and Ken Giles.

“He has been a very good citizen,” Amaro said. “He just speaks his mind.”

Amaro said that Papelbon reminds him of Billy Wagner, another former Phillies closer who occasionally created stirs with his blunt remarks.

Papelbon has expressed his desire to join a contender, even if it means waiving his limited no-trade clause. In July, he told reporters, “Some guys want to stay on a losing team? That’s mind-boggling to me. I think that’s a no-brainer.”

Said Amaro: “He gets ticked because we’re not winning. I don’t blame him.”