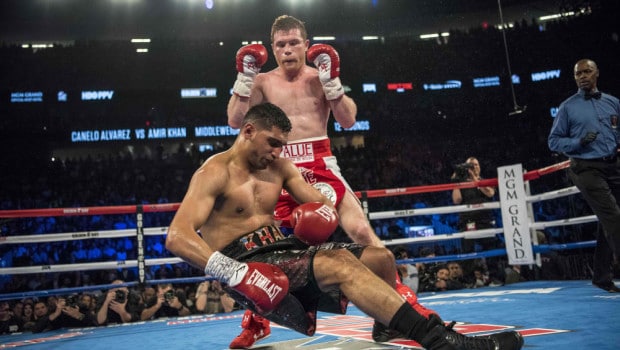 ALVAREZ KO’S KHAN IN 6, NEXT UP IS GENNADY GOLOVKIN

Canelo Alvarez chased Amir Khan around the ring last night in Vegas, looking for that opening to land the big punch everybody knew was coming.

Then, Canelo plowed a powerful overhand right flush into Khan’s jaw, and the British fighter crumpled, his head bouncing off the canvas. He was out cold.

And just like that, the biggest fight of the year so far was history.

The pro-Canelo crowd roared as referee Kenny Bayless waved it off. No 10-count was necessary on this night. Canelo raised his hands, then kneeled over Khan to make sure his vanquished opponent was all right.

The Mexican superstar, who seems to have all the qualifications to assume the mantle as the face of boxing, retained his WBC middleweight title thanks to his spectacular one-punch knockout.

And with that, the inaugural boxing card in front of a near sellout crowd of 16,540 at T-Mobile Arena just off the Vegas Strip was history. Thousands of delirious Canelo fans went home happy, their Cinco de Mayo weekend brought to the perfect close, a weekend that Canelo will own in this town for as long as he wants.

Sitting ringside was an interested spectator, Golovkin, the unified middleweight champion who also holds the WBC interim belt, which makes him the mandatory next opponent of Canelo. Triple G watched his rival’s version of a “big drama show” unfold before his eyes.

After it ended, Canelo came over to the ropes and gestured to Golovkin to come into the ring, as if to say, “Come on up, you’re next.”

“I’ll fight (Triple G) right now. Let’s put the gloves on and get in there with him.”

Khan, who was hospitalized as a precaution after the fight but tweeted that he was OK, and his trainer Virgil Hunter both agreed that Canelo should fight Golovkin next.

Golovkin was impressed by Canelo’s performance, saying it was “perfect, very good, and a good atmosphere.” He said he thought their fight would be a good matchup between two middleweights.