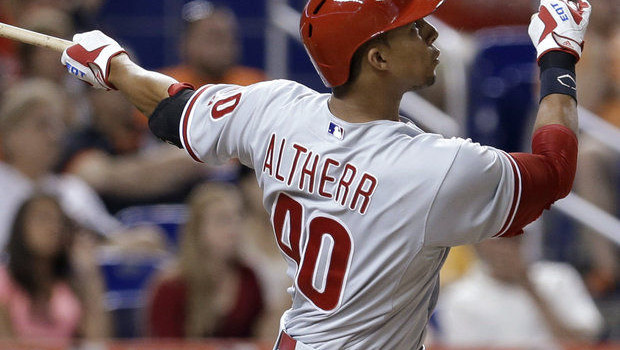 The Phillies are finding something liberating about trading all your old stars and having to depend on young talent to win games.

Almost as if their fans have no expectations.

Aaron Altherr (above) and Darin Ruf hit back-to-back solo home runs in the top of the ninth inning to lift the Phillies to a 4-2 victory over the Miami Marlins Saturday night.

The Phillies scored two runs in the top of the eighth, sparked by Darnell Sweeney’s first major league hit, a pinch-hit, solo homer that brought Phils within 2-1. Andres Blanco’s RBI double made it 2-2.

Altherr broke the tie with a homer off A.J. Ramos (1-4). Ruf followed with a homer on the next pitch to give the Phillies back-to-back home runs for the first time this season.

Elvis Araujo (2-1) got the final out of the eighth inning to earn the win. Ken Giles pitched a perfect ninth for his ninth save in 12 chances.

Six of the Phillies’ nine hits and all four runs came after the seventh inning. The Phillies came into the game 4-68 on the season when trailing after seven innings.

Marlins starter Justin Nicolino was in complete control with a 2-0 lead and two outs in the eighth. Sweeney made it 2-1 and Cesar Hernandez followed with a single ending Nicolino’s night. Bryan Morris came on in relief and allowed a game-tying double to Blanco.

Nicolino pitched a career-high 7 2-3 innings allowing two runs and five hits. He struck out four and walked one.

The Marlins had a chance to go-ahead in the bottom of the eighth when Martin Prado doubled and Justin Bour walked, but pinch-hitter Casey McGehee grounded out to end the inning.

Aaron Harang walked three batters in the third inning and the Marlins took advantage of the bases-loaded situation as Derek Dietrich hit a two-run double to center field.

Harang settled down after that and retired the final 13 batters he faced. He allowed two runs and two hits in seven innings.