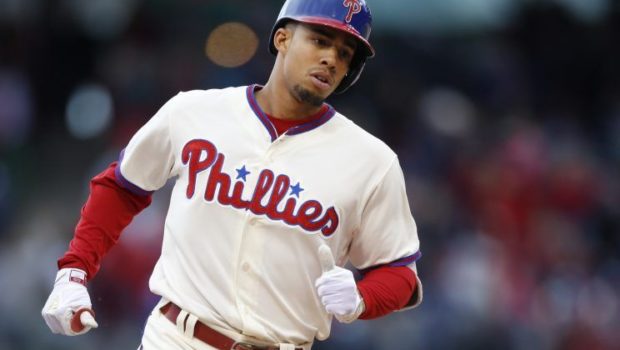 ALTHERR AND JOSEPH HAVE BEEN PHILLIES’ BIG BOPPERS!

Aaron Altherr (above) and Tommy Joseph have been two of the hottest hitters in baseball in May, and they came up big again yesterday in a 4-3 victory over the Reds.

Altherr ripped a single against Reds reliever Michael Lorenzen to start the bottom of the ninth inning. Lorenzen threw an 0-2 breaking ball to Joseph into the dirt. The ball bounced just a few feet from Reds catcher Tucker Barnhart, but Altherr ran to second to get into scoring position. Two pitches later, Joseph ripped a 97-mph fastball to center field to score Altherr.

Joseph is the first Phillies player to have two walk-off hits in three days since Juan Samuel on June 21-22, 1985.

It was just the Phillies’ sixth win in their last 27 games, but they can win their first series since April 26-27 with a victory Sunday.