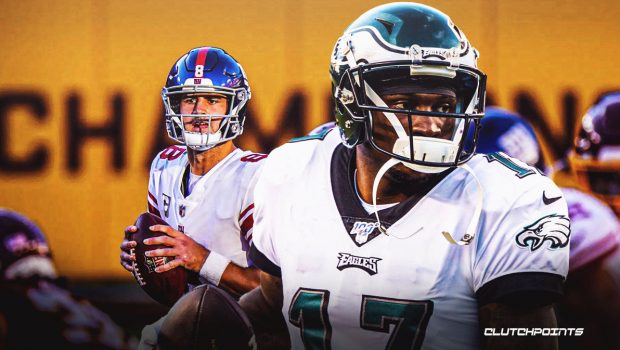 ALSHON JEFFERY (REMEMBER HIM?) BACK FOR EAGLES TODAY!

If Ian Rapoport is to be believed — and the NFL Network insider is never wrong — the Eagles will finally have long-lost receiver Alshon Jeffery in the line-up today against the Giants.

If so, it will be his first game action since last December, when he was injured against the Dolphins.

DeSean Jackson was moved to the injured reserve list at the end of October. Tight end Zach Ertz is also on injured reserve, and rookie first-round draft pick Jalen Reagor is still making his way back from injury.

Jeffery had been dealing with a Lisfranc injury and a calf issue to start the year, but he will have a chance to make immediate contributions in the passing game.

The Eagles are atop the weak NFC East at 3-4-1, and they are looking for their third consecutive win on Sunday against the Giants.

Philly’s passing game has still been rather inconsistent, with the offensive line struggling to protect Carson Wentz and Wentz making some poor throws. But Jeffery gives the former No. 2 overall pick another big-play weapon, if he is truly healthy.

Jeffery is averaging 14.2 yards per reception for his career, though that number has dwindled in each of his last three seasons with the Eagles. Still, the 30-year-old should see plenty of targets as a marquee option in a depleted receiving corps, especially considering how poor New York’s secondary has been this year.